The Government of Ghana has reintroduced the admission quota system for the 46 accredited Public Colleges of Education for the 2022/2023 academic year.

According to the list released by Ghana Tertiary Education Commission (GTEC), a total of 12,002 prospective teacher trainees are expected to be admitted into the 46 Colleges of Education for the 2022/2023 academic year. 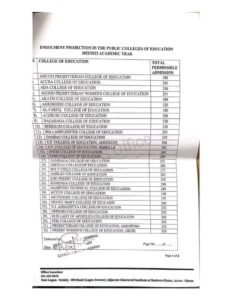 The erstwhile John Mahama administration scrapped the payment of allowances in the 2013/2014 academic year and replaced it with loans from the Student Loan Trust Fund, arguing that it would increase enrolment in the various colleges of education and reduce the financial burden on the government.

In December 2016, a then Deputy Minister of Education, Mr. Samuel Okudzeto Ablakwa, said the abolition of the teacher trainee allowances had increased enrolment in the colleges of education by 63.8%.

He explained that before then, admission to the colleges was restricted by a quota system, with the colleges admitting only 40 percent of their capacity, in view of the financial considerations.

That, according to him, prevented many prospective applicants from gaining admission to the colleges and that resulted in teacher deficit in the classrooms.

He said with the scrapping of the allowances and the quota system, enrolment into the colleges of education increased from 27,000 to 47,000 in the various colleges.

However, the current New Patriotic Party government insisted that the country still needed more teachers and nurses and pledged to introduce the allowances, since they served as motivation for many to attend nursing colleges and colleges of education.

The governing NPP went ahead to restore the allowances to students in nursing and teacher training colleges in 2017 and refused to introduce a quota system.

In May 2017, Professor Kwesi Yankah, the then Minister of State in Charge of Tertiary Education, said, Colleges of Education could admit as many qualified applicants as their available facilities can allow but without compromising quality and standards.

He insisted that the Ministry of Education under the Akufo-Addo government will not introduce a quota system for admission which could prevent many prospective applicants from getting admission into teacher training colleges.