Breaking News
Home / ENTERTAINMENT / ‘There Could Be Coup In Ghana’ – Rev. Owusu Bempah Cautions Akufo-Addo, Security Agencies To Be On The Alert 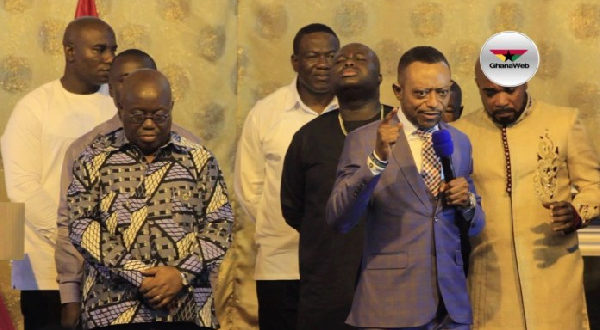 ‘There Could Be Coup In Ghana’ – Rev. Owusu Bempah Cautions Akufo-Addo, Security Agencies To Be On The Alert

Founder and leader of the Glorious Word Power Ministries, Prophet Isaac Owusu Bempah, has cautioned state authorities to be on the alert for a coup d’etat that can befall the nation.

The man of God has specifically called on the Presidency and security agencies to up their game to ensure the deed is thwarted.

He made the revelation as part of his numerous prophecies released at the 31st December annual Watch Night service.

“There could be coup in Ghana. The Presidency and security agencies must be on high alert,” he prophesied.

Meanwhile, the Ghana Police Service, on December 2 issued a statement cautioning religious bodies to be circumspect with the kind of prophecies they issue in order not to cause fear and panic.

The Service has settled on December 27 as Prophecy Communication Compliance Day each year, reminding men of God especially, the position of the law regarding the communication of prophecies.

As to whether Prophet Owusu Bempah’s prophecy falls under those that causes fear and panic would best be determined by the law enforcement agency.

1. Local airline could get involved in an accident that could shock the nation, aviation authorities must be careful. 2023 will witness a lot of plane crashes, we will be hearing of many more

2. COVID, I saw a spirit from muddy waters straddling north, south, east, west. Sun looked at the spirit and did nothing, the world could experience another serious ailment. The sun asked sons of men to do something about it.

3. A prominent tree in a forest was chopped off by a cutlass and trees were wailing. The trees were Ghanaians and the chopped tree was a prominent person.

4. US-branded planes releasing missiles and a dragon trying to strike it but unable to do so. America could enter a war that will affect or engulf the world

5. Another prominent Ghanaian may be lost and the Christian fraternity must intensify their prayers.

6. Four spirits have opened their mouths wide and are baying for the blood of men, as instructed by a voice

7. Deadly floods are likely to happen and it is important to undertake basic activities like desilting gutters and creating more

8. A lot of youth deaths on the horizon

9. Issues of occultism and ritualism will also be on the ascendency

Snake with eyes, releasing fire in different parts of the country

10. If we are not careful, a coup could take place. I saw arms without bodies holding weapons and undertaking destructive actions. The hand was swift and untraceable, its target was the presidency.

11. A prominent person will travel to seek medical care but won’t return

12. Lots of policemen will be lost unless we pray otherwise, they’d be lost through exchange of bullets.

13. Things are tough in the nation but I saw a pit and a giant in it. That hole was filled with darkness and the giant was squeezing Ghana into the valley then a hand from above was rescuing some people

14. Civil wars could break out in some African countries and they’d be reported on CNN, BBC, Al Jazeera etc. there is the need for prayers and more prayers

15. Finances will be tough but those faithful to God will have it easy.

16. There shall be lots of marriages this year.

17. There is white cloud from God onto the land but there are some spirits that want to block it and it led to a struggle. If prayers are enough, things will not

18. Accidents could be rampant this year but if people pray, if the nation prays, God will release fire from heaven to cure these accidents. NRSC should be on their game

Below is the full release issued by the police:

A year ago today, December 27, 2021, the Ghana Police Service drew the attention of the general public, especially members of the religious community to the law regarding the communication of prophecies and urged compliance to the law to ensure continuous security and law and order in the country.

We wish to commend the public, particularly religious groups, for their cooperation over the period by being circumspect and conscious of the law and adopting legally acceptable means of communicating prophecies to those affected.

This has contributed greatly in creating an environment where people are able to freely profess their faith without unnecessary anxiety and fear of impending harm or death.

Ghana is indeed grateful to the religious leaders in particular and the religious community as a whole for their patriotic understanding of the situation.

As the year 2022 draws to a close, we wish to once again entreat the general public, especially faith-based groups to ensure continuous compliance with the law as it relates to the communication of prophecies.

Let us continue to remember that whereas we have the right to practise our faith in religion, freedom of worship and speech, this right must not be exercised in violation of the rights of others and the public interest.

As part of sustaining the gains made so far, the Police Service has adopted 27th December of each year as the Prophecy Communication Compliance Day.

This day is being set aside to remind all of us, to practice our faith within the confines of the law to ensure a safe, secure environment, free of anxiety generated from predictions of impending harm, danger, or death.

We wish to take this opportunity to wish everyone a Merry Christmas and a Prosperous New Year.