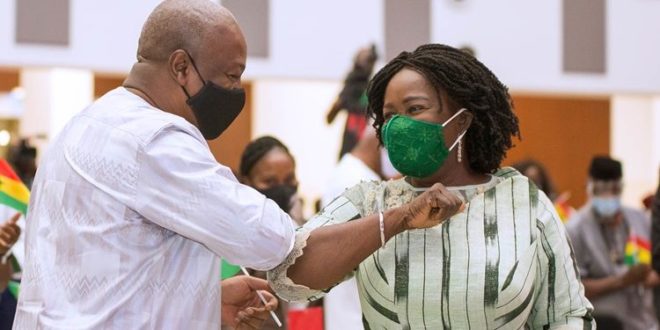 The Member of Parliament for North Tongu Constituency, Samuel Okudzeto Ablakwa, has outlined twenty (20) events he envisions will occur within Ghana’s geopolitical space in the year 2023.

According to the opposition National Democratic Congress MP, the party’s 2020 presidential candidate, former President John Dramani Mahama, who is regarded by many as the party’s candidate for the 2024 elections, will settle on Professor Jane Naana Opoku-Agyemang as his running mate.

While predicting a landslide victory for former President Mahama in the NDC’s flagbearership contest, the MP emphasised that the former president will retain his running mate.

“Former President John Mahama will emerge victorious from the 2023 NDC Flagbearer Primaries with more than 95% of valid votes cast.

“Former President John Mahama expected to retain Professor Naana Jane Opoku-Agyemang as his Running Mate for the 2024 presidential election,” he wrote in a Facebook post on Sunday, January 1, 2023.

Among other things, Mr Ablakwa predicted a substantial delay in the agreement by the Board of the International Monetary Fund to Ghana’s $3 billion loan request which received a Staff Level Agreement in the late part of 2022.

He further made predictions about the calls for the removal of the Minister for Finance, Ken Ofori-Atta and how it will lead to a turmoil in the ruling New Patriotic Party.

According to him, the fallout of the turmoil will be a victimization of some NPP MPs who are actively involved in the push for the minister’s removal.

Read the full list of forecasts by Okudzeto Ablakwa below:

[NB: These are no charlatanic prophesies]

1) Former President John Mahama will emerge victorious from the 2023 NDC Flagbearer Primaries with more than 95% of valid votes cast;

See also  Presidency To North Tongu MP: Akufo-Addo’s Travels Have Benefits, What About Yours?

3) Public agitations against the Akufo-Addo/Bawumia/Ofori-Atta debt exchange programme predicted to reach a crescendo as an overwhelming majority of Ghanaians will outrightly reject the draconian terms;

4) The debt exchange resistance and considerable turmoil would lead to a substantial delay in an IMF Board Agreement, which development will further exacerbate Ghana’s current economic calamity;

5) RIBADE Limited, the JV contractors (consisting Rizzani de Eccher SpA, M. Barbisotti & Sons Ltd and DeSimone Ltd) tasked to construct President Akufo-Addo’s $400million Cathedral will formally announce their disinterest and final withdrawal from the beleaguered project which has consistently been a cause célèbre;

6) Owners of the Waterstone Realty Luxury Apartment Complex demolished in May 2018 to pave way for the cathedral construction are expected to rebuff renewed appeals from government for an out of court settlement and will vigorously pursue their GHS120million judgment debt case;

7) NPP MPs will early this year discover that they were tricked by President Akufo-Addo and that he is absolutely determined to keep his cousin at the Finance Ministry even if that will cost him his presidency;

8)NPP MPs will bitterly regret their betrayal of the NDC caucus by not voting together with us to secure the two-third constitutional threshold that would have ousted disastrous Ken Ofori-Atta. Some of the disappointed NPP MPs will publicly concede to their tactical error and shall be seeking new belated #KenMustGo collaborations with the NDC caucus;

9) Meanwhile, I project that President Akufo-Addo and his cabal will proceed to victimize the #KenMustGo NPP MPs by actively sponsoring candidates against them in the upcoming NPP parliamentary primaries;

10) The two pending nominations for Justices of the Supreme Court which have currently been caught up in parliamentary gridlock will move from bad to worse. The embattled nominees (Justices George Kingsley Koomson and Ernest Yao Gaewu) may have to brace themselves for a fatal outcome;

11) I can very safely predict that Ghana’s Supreme Court shall continue to treat our e-Levy case without any sense of urgency. Unlike in the controversial ‘Deputy Speakers Can Vote’ Case which was decided within an impressive 4 month supersonic speed — Abdulai filed in December 2021, judgement was ready by March 2022 and by April his review application had been unanimously dismissed. Comparatively, it’s been 10 painful months since Minority Leader Haruna Iddrisu, Mahama Ayariga, and my humble self filed our e-Levy case, specifically on March 30, 2022; and guess what, we don’t even have a date for the hearing of the substantive case;

12) Like many Ghanaians, I can equally forecast with ease that Assin North MP, James Gyakye Quayson’s injunction will remain as an effective all-year restraint and thereby guarantee the NPP a numerical advantage in Ghana’s historic hung parliament;

13) When Chief Justice Anin Yeboah retires in May this year, the frosty relations with the NDC caucus and palpable bias of the apex court which he championed is most likely going to haunt his successor and thereby affect what would have otherwise been a smooth parliamentary vetting and approval process of Ghana’s next Chief Justice;

14) 2023 appears set to be the year of by-elections. I can see at least two by-elections on the horizon;

15) Expect financial analysts and victims of the so-called financial sector cleanup such as Dr. Ndoum, Dr. Dufuor and Kofi Amoabeng to openly criticize what would apparently amount to patent discrimination in the projected Databank bailout;

16) Considering the monumental economic crisis created by government’s mismanagement and gross ineptitude; coupled with the outrage of Ghanaians, I anticipate that President Akufo-Addo will set a refreshing record in 2023 by his own abysmal standards, as he totally avoids his infamous €20,000 (GHS218,000) an hour chartered ‘sky bath’ trips.
By the way, that is not to suggest that I shall be dismantling my unimpeachable surveillance systems — all-year-round tracking shall continue unabated, for God and country;

17) I project that President Akufo-Addo will this year succumb to IMF and incessant public pressure by significantly reducing the size of his government and rationalizing his ministries;

18) Like many pundits, I am disturbed that Ghana-Russia relations will face further deterioration despite government’s strenuous efforts behind the scenes to repair President Akufo-Addo’s Washington faux pas and a litany of amateurish provocations;

19) Following last month’s phenomenal formal apology offered by Dutch Prime Minister Mark Rutte on behalf of the Dutch state for the Netherlands’ historical role in the slave trade, I expect a few more western nations to emulate the worthy example of the Dutch by rendering sincere, unqualified apologies and reopening serious discussions for reparation, albeit, after 150 years since slavery was abolished;

20) Sadly, Ghanaians should expect more scandals in 2023. The first in the ever unending series of revelations would be put in the public domain from next week.

I'm Adwenpa-Hene |Blogger & Broadcaster Journalist. I am the CEO and manager of this noble website. I publish on Entertainment, Sports, Politics, Lifestyle, and Technology. You can also follow Us on : YouTube Channel - My Ghana Media TV, Facebook - MyghanaMedia TV , Twitter - @MyGhanamedia2 & Instagram - My Ghana Media TV. Email Address: [email protected] Contact Us: 0200818719
@@MyGhanamedia2
Previous ‘Republic Of Y3mpe Nokware’: IGP Will Be Sacked From Office, Kwame Dramani Will Sit At Jubilee House – Prophet Nigel Gaisie
Next Chief Of Staff To Universities: Take Economic Conditions Into Account Before Charging Fees