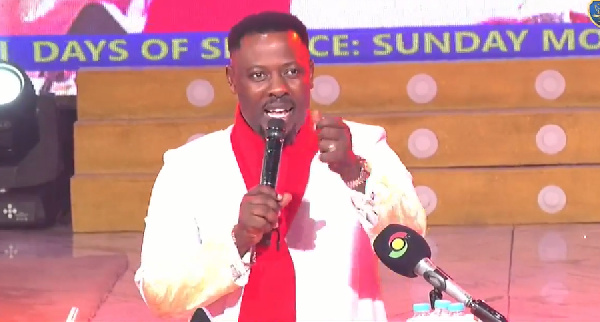 ‘Republic Of Y3mpe Nokware’: IGP Will Be Sacked From Office, Kwame Dramani Will Sit At Jubilee House – Prophet Nigel Gaisie

Despite various warnings and cautions from the Ghana Police Service to pastors that the ban on prophecies is still in force, the founder of the Prophetic Hill Chapel, Nigel Gaisie went ahead to deliver what he claims are messages from God on 31st December.

For the second time running, the General Overseer adopted a cryptic description of a country to release his prophecies at his Watch Night service.

Just like the previous year when he used the name Republic of Umuofia, as the country he was prophesying to, at the 2022 Watch Night service, he came up with another vague nation which he called Republic of Yempε Nokware, literally translated to mean ‘We don’t like the truth”.

Earlier, Prophet Nigel Gaisie had indicated that God has already given him 47 prophecies for the country out of which number 14 was for the IGP. He, however, indicated that the number could increase before December 31.

See also  We Are Currently Not Recruiting – GNFS Cautions Ghanaians

Delivering a sermon to his congregation, Prophet Nigel who spoke in the local dialect and had a translator said;

“The Lord took my spirit to the Republic of Y3mpe Nokware, and I saw that there was a change in IGP. In the realms of the spirit, I saw the IGP and his boots were taken off.

“I dreamt, I saw and it’ll come to pass if they don’t pray about it.”

In another of the prophecies, Nigel Gaisie said he saw Kwame Dramani in white, sitting at the Jubilee House.

He also added that the church in Nigeria will come under attack whiles a prominent pastor from Nigeria will die.

He was then transported (spiritually) to the Finance Ministry where he saw that the country’s coffers were empty. The caution he was given was to tell the people to change the horse with anger or the country will be led into a calamity that will take 70-years to come back from.

He also alleged that some media personnel within the country will be prosecuted since the fourth arm of government will face numerous attacks in the coming months.

In all, the Prophet had over 50 prophecies which he shared with the congregants.

On December 27, the police reminded religious groups and leaders to be measured in the communication of end-of-year prophecies that could spark panic and controversy in Ghana.

According to the Police Service, religious freedom is still subject to Ghana’s laws.

It therefore entreated the general public, especially faith-based groups to ensure continuous compliance with the law as it relates to the communication of prophecies.

IGP for ‘Republic of Yempɛ Nokware’ will be changed, Kwame Dramani will sit at Jubilee House – Nigel Gaisie

Below is a video clip of the prophecy: