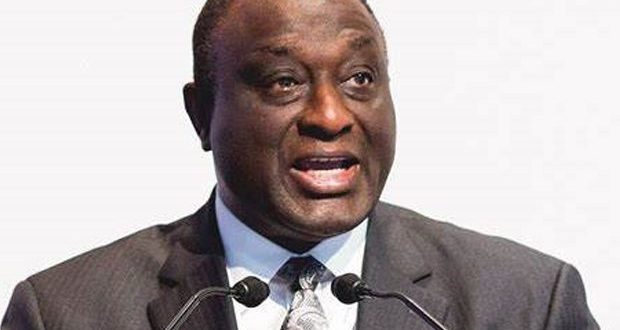 Information available to MyGhanaMedia.com indicates that the Trade and Industry Minister,  Alan John Kwadwo Kyerematen has resigned from the Akufo-Addo government in order to focus on his presidential ambition.

Multiple sources close to the minister said he tendered his resignation letter to President Nana Akufo-Addo on Thursday, Jan 5, 2023.

The man popularly called ‘Alan Cash’ has long been rumoured to be nursing the ambition to contest the flagbearership slot of the New Patriotic Party (NPP).

But it’s unclear if the resignation is to allow him to concentrate on that ambition.

Alan Kyerematen served in the same position between 2003 and 2007.

He has an extensive and distinguished record in international trade and public policy, enterprise development, politics and diplomacy.

He is a former Ambassador to the US, UN Policy Advisor, a lawyer and a Senior Corporate Executive. As Ghana’s Minister of Trade, Industry and Presidential Special Initiatives from 2003 to 2007, he led the design, development and implementation of innovative programmes and special interventions which have become new strategic pillars of growth for the Ghanaian economy.

He also played a key role in shaping Africa’s Trade Policy agenda in the WTO, the EU-ACP Economic Partnership Negotiations, AGOA and UNCTAD.

Prior to his appointment as Minister, Mr. Kyerematen served as Ambassador of Ghana to the United States of America from 2001 to 2003. In that role, he negotiated various landmark trade and investment agreements between Ghana and the United States, and initiated the establishment of the Ghana-United States Economic Council, which played a strategic role in deepening trade relations between the two countries. Between 1998-2001, Alan Kyerematen served as the first Regional Director of ENTERPRISE AFRICA, UNDP’s flagship initiative for the development and promotion of small and medium enterprises in Africa. Under that framework, he established enterprise support programmes in 13 Sub-Saharan Africa countries – Botswana, Benin, Cameroon, Democratic Republic of Congo, Ethiopia, Mauritius, Mozambique, Namibia, Nigeria, Senegal, South Africa and Uganda. Over 4,000 African entrepreneurs and small businesses have benefited from these programmes.

In 1990, Alan Kyerematen was responsible for establishing and managing the EMPRETEC Programme in Ghana, a leading business development institution sponsored by the United Nations and Barclays Bank Limited. He led the transformation of EMPRETEC from a UN project into an independent Foundation, which is recognized as a world-class institution and best practice model for entrepreneurship development in Africa. Between 1984 and 1990, he managed a number of major private and public sector consulting assignments in Ghana, as a Principal Consultant and Head of Public Systems Management with the Management Development and Productivity Institute (MDPI), a leading management development institution in Ghana. Prior to this, he was a senior corporate executive with UAC Ghana Ltd, a subsidiary of Unilever International, where he worked in various managerial positions with distinction between 1977-1984.

As Coordinator of the African Trade Policy Centre of the United Nations Economic Commission for Africa in Addis Ababa, from July 2011-December 2013, Alan Kyerematen led efforts in building capacity in various African countries in trade policy formulation and trade negotiations. In addition, he was a leading member of the technical team of the African Union that developed the Action Plan for the establishment of a Continental Free Trade Area for Africa.

Alan Kyerematen is a graduate of Economics from the University of Ghana, and is also a qualified Barrister-at-Law from the Ghana Law School. In addition, he was a Hubert Humphrey Fellow at the School of Public Affairs and the School of Management of the University of Minnesota, under the US Fulbright Fellowship Programme. He was a Member of the Council of Governors of the British Executive Service Overseas (BESO) in the United Kingdom, and has also served as a Board member of several other organizations in Ghana.

In 1994, Mr. Kyerematen was listed as one of the top 100 Global Leaders for the New Millennium by the Time International Magazine together with other personalities such as Bill Gates and John F Kennedy Jnr. of the United States of America. In 2013, he was nominated by the Heads of States of the African Union to contest as Africa’s candidate for the position of Director General of the World Trade Organization (WTO).

Mr Kyerematen made an attempt at the leadership of the NPP in 2007, capturing 32.3% of the votes cast.

He was first runner-up to Nana Akufo-Addo who gained 47.96% of votes cast.

Mr Kyerematen made other attempts at the party’s leadership in 2010 and 2014 but placed second to Akufo-Addo, who won the primaries.

In 2012, Ghana nominated Kyerematen for the post of WTO director-general to succeed out-going Director-General Pascal Lamy, and his candidature received the backing of the African Union (AU).

However, he did not make the shortlist for the final selection process in 2013.

In 2017, Kyerematen was sworn in as Ghana’s Trade Minister.

I'm Adwenpa-Hene |Blogger & Broadcaster Journalist. I am the CEO and manager of this noble website. I publish on Entertainment, Sports, Politics, Lifestyle, and Technology. You can also follow Us on : YouTube Channel - My Ghana Media TV, Facebook - MyghanaMedia TV , Twitter - @MyGhanamedia2 & Instagram - My Ghana Media TV. Email Address: [email protected] Contact Us: 0200818719
@@MyGhanamedia2
Previous NPP Appoints Amponsah-Kyeretwie As New Director For External Affairs
Next NSA Confirms It Will Consider Suggestions To Name Stadium In Ghana After Pele