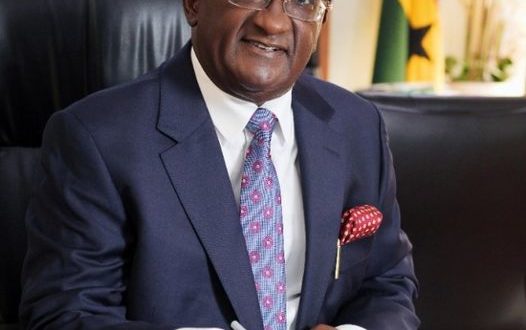 Sources within the Akufo-Addo government have revealed exclusively to Adom Online that another high-profile minister shall resign by midday today, January 10, 2023.

The minister in question is that of Food and Agriculture, Dr Owusu Afriyie Akoto whose resignation is coming on the back of his former colleague, Alan Kyeremateng, who also resigned less than a fortnight ago.

The sources say Dr Akoto will tender his resignation letter to President Nana Akufo-Addo by midday.

While the reasons for the resignation aren’t clear yet, the Agric Minister who is also a close friend of the President is believed to be doing so in order to focus on his flagbearership ambitions for his party, the New Patriotic Party.

He worked as an Economist, Senior Economist, Principal Economist, and Chief Economic Advisor over a period of 18 years at the International Coffee Organization (ICO) in London, England. He has also worked as a consultant to the World Bank and the United Nations on Soft Commodities (Cocoa, Coffee, Sugar). Between 1995 and 2007, he was the CEO of two international commodity companies, Goldcrest Commodities Limited and Plantation Resources Limited both based in Ghana.

In 2007 he was appointed the Chairman of the NPP manifesto committee and was the principal author of the Party’s Manifesto for the 2008 elections. He was subsequently elected as a member of parliament in 2008. He spent two terms as a Member of Parliament for Kwadaso Constituency in Kumasi, Ashanti Region. In Parliament, he held the position of Deputy Ranking Member and subsequently the substantive Ranking Member for the Committee on Food, Agriculture and Cocoa Affairs until 2017.

In 2017 he was appointed the Minister for Food and Agriculture.

In this role he has spearheaded the design and implementation of the Government of Ghana’s popular and transformational agricultural flagship programme, Planting for Food and Jobs (PFJ). Under the leadership of Hon. Dr Owusu Afriyie Akoto Ghana has been transformed into the breadbasket of the West.

In 2019, Ghana was ranked fourth on the African continent by the Economic Intelligence Unit (EIU) in its Global Food Security Index (GFSI). In that year (2019) the sector grew strongly by 4.7% followed by 7.4% at the peak of covid in 2020 and 8.4% in 2021 – the highest annual performance in the Fourth Republic. This sterling performance compares with the Comprehensive Africa Agriculture Development Programme’s (CAADP) benchmark target of 6% growth of agriculture for the attainment of national food security

Under his leadership an Act of Parliament established the Tree Crop Development Authority in 2020, to coordinate and promote the development of six tree crops – cashew, rubber, oil palm, coconut, mango and shea. At full development, these selected crops have the combined potential of generating an additional USD12 billion per annum to supplement the annual USD2 billion from cocoa.

See also  Confirmation Of MMDCEs: Withdraw Nominees After Second Round Of Voting - CLGA

He oversaw the re-launch of the National Cocoa Rehabilitation Programme through which a total farm area of 56,343 hectares has been fully treated across the cocoa growing regions as of 30th September 2022. As a result of the success of the programme, thousands of farmers who had abandoned their cocoa farms due to the devastating effect of the Cocoa Swollen Shoot Virus Disease (CSSVD) have returned to their farms.

Since 2017, Hon. Dr. Akoto has directed substantial budgetary resources to the construction and rehabilitation of 12 irrigation schemes of which 6 are above 90% complete, five are between 45% to 70% level of completion and the Pwalugu dam is currently at a level 5%. Together, these irrigation projects will make available 31,415 hectares of land for all year-round crop production when completed.

Through his initiative, Government’s initiative to address major marketing problems in the agriculture sector includes the construction of 80 warehouses of 1000 metric tonne capacity each for food storage and to reduce post-harvest losses.

In his bid to accelerate the process of agricultural modernization, he instituted several bilateral arrangements that resulted in the importation of assorted agricultural machinery including tractors, power tillers, planters, threshers, combine harvesters and hand-held equipment for smallholder farmers at a total of over $100 million. These farm equipment and machinery are being sold at the subsidized rate of 40% to farmers and agro-processors.

Dr. Akoto has implemented the construction of three greenhouse training centres with attached commercial units at Dawhenya, Akumadan and Bawjiase for training youth in high-quality vegetable production. These vegetables are sold to high-end shops such as Palace Mall, Shoprite, Starbites, KFC, and Burger King in Tema, Accra and Kumasi.

For his transformational leadership, the Hon. Dr. Akoto has won several awards and appointments of recognition. In February 2019, AFRICAN SEEDS which is the intergovernmental Seed Agency of the African Union conferred on him the title of SEED CHAMPION OF AFRICA.

In the same 2019, he was appointed Chairman of the Board of the Inter African Coffee Organisation (IACO), a pan-African organization promoting the interest of coffee producers on the continent.

He is the immediate past Chairman of the ECOWAS Specialised Ministerial Technical Council for Agriculture (CTMS Agric) and, was unanimously appointed Chairman of the Steering Committee for the newly established Côte d’Ivoire-Ghana Cocoa Initiative.