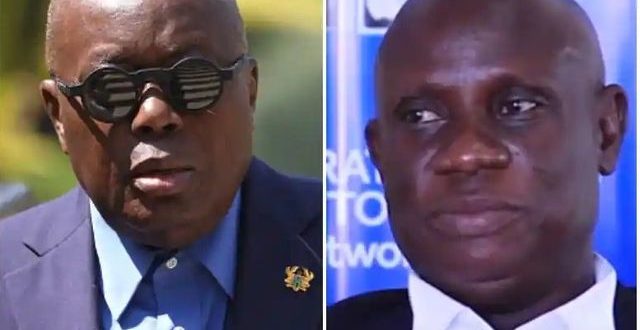 Lawyer Nana Obiri Boahen, the former deputy General Secretary of the New Patriotic Party (NPP) has lamented outright neglect by President Nana Addo Dankwa Akufo-Addo who is yet to hand him any role in his government.

Obiri Boahen says despite his hard work for the party, he was not given any appointment by the president since leaving his post.

To drum home the level of neglect, the Sunyani-based lawyer said he had been so neglected that he has yet to be offered even the role of a manager of a public toilet in his town.

Nonetheless, Nana Obiri Boahen remains committed to the NPP and has left the situation for God to handle.

“I was not given even a public toilet to manage. They could have asked me to manage all the public toilets in Sunyani but nothing like that happened. God will handle my case for me. Sometimes you meet people and they ask if you are under some spell because they don’t understand why I was not assigned any role.

“I had a conversation with someone about Adomako-Baafi’s rejection of the National Lottery Authority over religious grounds. The person sought to know if I was offered any such role and I told him never. No one called or offered me any position. Even assemblyman appointment, I was overlooked.

“After the 2020 elections, a list from the Bono Region was submitted. The same was done in 2017 but I wasn’t considered. After every election, regional chairmen are made to send list of potential appointees but I wasn’t looked at. It shouldn’t sound like I’m peeved because I was denied a role. God’s time is the best,” he said on Okay FM.

Nana Obiri Boahen says he has now channeled the disappointment into campaigning for Vice President, Dr Mahamudu Bawumia to win the party’s primaries and the main election in 2024.

Nana Obiri Boahen further disclosed that during the festive season, he embarked on a one-man campaign to engineer support for Bawumia.

“I told you I went to Walewale to see the graves of Bawumia’s parents and asked for their spiritual support. I told them that, if spirits indeed operate, then they should be behind me to give glory to their son Bawumia and themselves. I also went to CK Tedam’s grave to do the same thing because while he was alive, he really liked me,” he said.