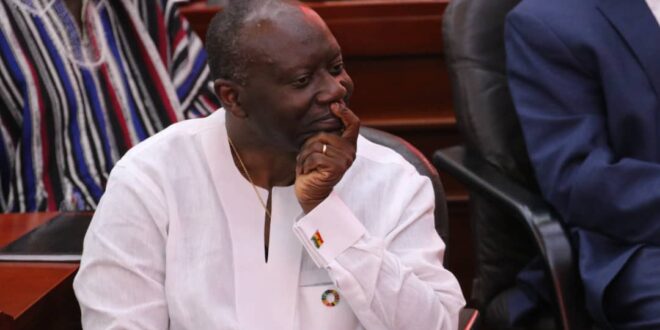 General Secretary of the National Democratic Congress (NDC) Johnson Asiedu Nketia has explained the reason why the Minority in Parliament agreed to approve Ken Ofori-Atta as the Minister of Finance.

The decision by the Minority members on the Appointments Committee to approve Mr Ofori-Atta “by consensus” on Monday, March 29 came as a surprise to party supporters as the NDC has been critical of the economy of the country and blamed Mr Ofori-Atta for the woes.

Speaking in an interview on First Take on 3FM on Tuesday, March 30, the NDC General Secretary said they were surprised President Nana Addo Dankwa Akufo-Addo nominated Mr Ofori-Atta again as his Finance Minister.

To the NDC, it would have been in the interest of the New Patriotic Party (NPP) government to change him given the current state of the economy.

But they agreed that if Mr Ofori-Atta is given the greenlight after his performance during the two-day vetting to continue to head the Finance Ministry, it will be easy for the NDC to return to power.

“We thought that this one could be managed better so we have been holding meetings with the Minority group and our Council of Elders and everyone concerned with our party and we have come to the conclusion that Ofori-Atta if Nana Addo insists should continue to be Minister of Finance, we should let him go because we know Ofori-Atta is a lame duck minister at this stage,” General Mosquito, as he is affectionately called, told host Dzifa Gbeho-Bampoh.

“He has been badly bruised and it would have served the interest of the NPP government to change him but if that is what they want, it can only facilitate our coming to power quicker.

“So we just agreed that we should have Nana Akufo-Addo have Ofori-Atta as his Minister of Finance.”

I'm Adwenpa-Hene |Blogger & Broadcaster Journalist. I am the CEO and manager of this noble website. I publish on Entertainment, Sports, Politics, Lifestyle, and Technology. You can also follow Us on : YouTube Channel - My Ghana Media TV, Facebook - MyghanaMedia TV , Twitter - @MyGhanamedia2 & Instagram - My Ghana Media TV. Email Address: [email protected] Contact Us: 0200818719
@@MyGhanamedia2
Previous How Can I Kill My Nephew Seek Of Money, He Stole From Me– Kpoo Kɛkɛ CEO
Next Ghanaian Referee Collapses while Officiating Ivory Coast-Ethiopia AFCON Qualifier