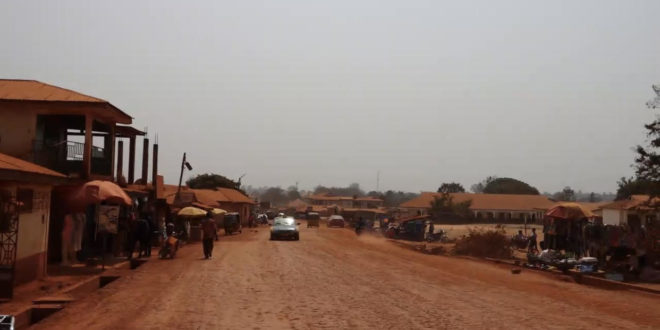 Traditional leaders and residents of Ahafo Kenyasi in the Asutifi North District of the Ahafo Region have slammed Newmont Mining Company for failing to carry out their corporate responsibility towards the community after 14 years of intensive operation on their soil.

They have cautioned that if the company have turned deaf ears at their request, should the youth take any decision which might upset their work, authorities should not accuse them of being immoral.

The road network at Kenyasi has been disappointing for years now and according to residents, the government has refused to come to them with the knowledge that it is the corporate responsibility of the Newmont Mining Company towards Kenyasi and its surrounding communities to put their roads in better shapes yet none has materialized.

The Ankobeahene of Kenyasi No. 1 told that before former President Kufuor left office, the Kenyasi-Ntotoroso road was in an improved condition yet until the arrival of the Newmont Company, the roads have been stressed and ruined by their machines, and it’s unfortunate they have failed to repair what they have destroyed.

Nana with uneasiness disclosed that with the help of the Ghanaian government, Newmont has been able to construct a 40-kilometer road at Akim in the Eastern Region recently, meanwhile their 12-km highway has been abandoned despite talks from the Minister for Lands and Natural Resources, Samuel Abu Jinapor to refurbish the road.

He further cautioned that gone are the days they used to calm down the youth to avoid heated protests against the mining company yet they have come to the realization that the authorities of Newmont have deliberately abandoned their needs therefore, the animated actions of residents against them will not be intervened.

“Their machines put the road in deplorable shape and it’s been 14 years now, they have not decided to repair the stretch,” Nana said.

“We don’t understand why they are failing to perform their responsibility as a company towards residents. Petitions have been made to them by the Chief himself and they have done nothing about it. “The youth keep accusing us of being behind the deplorable state of the road yet we have no clue.

Newmont have put Akim road; 40 kilometers in good shape, when they took over 15 percent. Why can’t they just put to shape a 12-mile road?

“We are not fools to be taken for granted. We keep speaking to the youth not to take any bad action yet their decision to construct Akim road is an insult to us. Why can’t they do ours.  We have done whatever we can and have realised that its intentional.

See also  Mahama To Voltarians: You Didn’t Disappoint Me; You Did Your Best

“Government is not willing and we thought the presence of Newmont will salvage us. If the youth go against Newmont, they shouldn’t come to us because Abu Jinapor has already spoken to them yet they are refusing to take action.

Angry residents, led by Yussif Yakubu Chibsah bitterly spoke that the company offers no assistance to the youth of Ahafo Kenyasi, mentioning that no inhabitant of Kenyasi has been employed in the mining company leaving youth in the vicinity jobless however, their roads has been shabby, dressed with dust which has tremendously affected commerce in the community.

He warned that if the mining company does not restore their former road, they will take radical actions and if that means blocking roads and ceasing activities of Newmont, they will.

“Newmont has been adamant towards us all this while,” he complained.

“They are refusing to employ us and always bringing strangers here. If so, why would they deny us employment. Everything seems deprived and its really worsening matters here.

“If they fail to heed us, we’ll demonstrate against the government and block the roads. We cannot entertain this attitude anymore. Money is extracted from our grounds yet see what we are going through.”