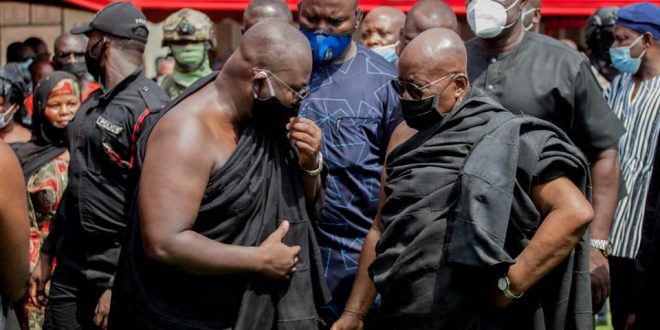 This was on Saturday, July 10, 2021, as he buries his mother, Georgina Oppong in the Ashanti Region.

Aunty Georgina, as she was affectionately called, died at the age of 74 with the solemn ceremony held at the Akosa School Park at North Suntreso.

She was later interred at Atimatim Maase also in the Ashanti Region.

The final funeral rites drew mourners from far and near to pay their last respects and also extend condolences to Mr Boakye who is also the Works and Housing Minister.

Send your news stories to myghanamedia@gmail.com and Chat with us via WhatsApp on +233200818719

I'm Adwenpa-Hene |Blogger & Broadcaster Journalist. I am the CEO and manager of this noble website. I publish on Entertainment, Sports, Politics, Lifestyle, and Technology. You can also follow Us on : YouTube Channel - My Ghana Media TV, Facebook - MyghanaMedia TV , Twitter - @MyGhanamedia2 & Instagram - My Ghana Media TV. Email Address: myghanamedia@gmail.com Contact Us: 0200818719
@@MyGhanamedia2
Previous Akufo-Addo To Visit Upper West Region On July 13
Next Remove Taxes From LPG If You Are Serious About Sustainable Development – Economist To government