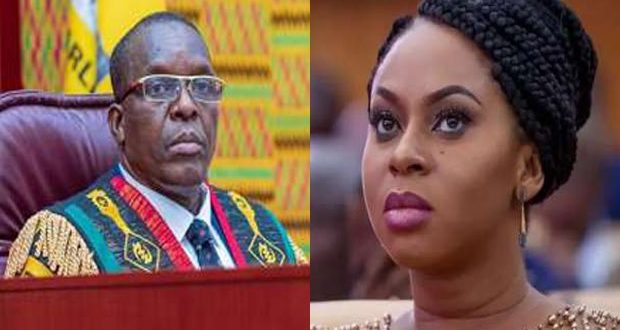 The Speaker of Parliament, Alban Bagbin, has deferred his ruling on Dome Kwabenya MP, Sarah Adwoa Safo, who has been cited for absenteeism.

At stake was whether the Dome Kwabenya seat would have been declared vacant after Adwoa Safo did not honour her summons by the Privileges Committee, which considered her absenteeism.

Speaking after a debate on the report by the Privileges Committee, Mr. Bagbin said he needed time to submit a written ruling.

“I cannot in the haste of today give you a ruling,” he said.

Under the circumstances, Mr. Bagbin said there was a need to suspend sitting.

“On return [from recess], I will deliver the written ruling,” Mr. Bagbin assured.

See also  Majority To Bagbin: ‘Tell Us To Find A New Speaker If You Can’t Preside Again’

During the debate, the Majority Leader, Osei Kyei-Mensah-Bonsu, tried to block the decision on a report by Privileges Committee.

He argued that the report was tabled to provide information and for the plenary to take a decision on it.

In his argument, Mr. Kyei-Mensah-Bonsu said the committee’s report should not have been advertised as a motion which would require a determination.

On the Minority side, Mahama Ayariga, the Bawku Central MP, argued that Parliament should have debated the motion because of the gravity of the matter at hand.

The Privileges Committee had delivered a split decision on the fate of Adwoa Safo who has been absent and out of Ghana beyond the mandatory 15 days without permission.

According to a copy of the report, the Majority wants the seat declared vacant while the Minority jumped to the defence of the absentee MP, saying she still needed to be given a chance to explain herself.

The Majority MPs on the committee cited Article 97 (1) (c) of the 1992 Constitution and the Court of Appeal decision in the case of Professor Stephen Kwaku Asare v the Attorney General & 3 Ors, in this regard.

The committee however determined that the excuse from her two other colleagues, Kennedy Agyepong and Henry Quartey for absenting themselves were reasonable.

Speaking to Joy News from the US, back in May, she attributed her long absence from Parliament to family issues, saying, among others, that her son was unwell.

Sarah Adwoa Safo also accused some Minority MPs members and a number of her colleague Majority MPs of engaging in a political witch hunt with her as the target.