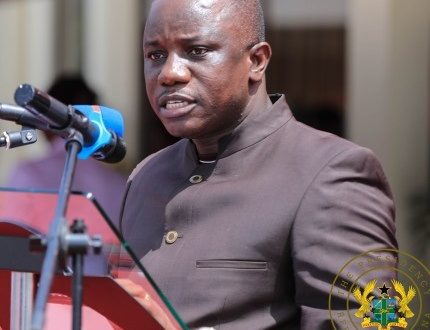 A disgruntled youth group of the New Patriotic Party in the Bimbilla constituency has given the Member of Parliament for the area, Dominic Aduna Bingab Nitiwul , a three-month ultimatum to complete the construction of the community centre in the constituency capital or face their wrath.

They alleged that the MP who doubles as the Defense Minister during the 2020 campaign caused the demolition of the old community centre with a promise to build a multipurpose one for the use of the community.

Currently, the project is estimated to be 50 percent completed and seems abandoned, a situation the youth have bemoaned.

The agitated youth are therefore asking the MP to fulfil his promise within the next three months by ensuring the completion of the project.

Some of the youth who spoke to Citi News expressed disappointment at the MP.

“We are very disappointed in our Member of Parliament and Minister for Defence. In fact, the youth have been patient enough and this time, we are giving him a three-month ultimatum to complete the community centre or face our wrath. During the campaigns, he promised that he was going to build it in six months. It’s been three years and the project appears abandoned.”

The youth also mentioned other projects such as the Bimbilla Senior high school dining hall which has been under construction since 2013. Citi News on several occasions reported on how students of the school are left to the mercy of the weather as they eat outside.

The youth also accused the MP of deceiving them after he failed to provide the astroturf he promised.

“Our MP has been deceiving us for long. Look at the position he holds in the government and there is nothing to show. His colleague MPs like Abu Jinapor of Damongo, Tampuli of Gushegu, Aminu Anta of Karaga and Farouk Aliu Mahama of Yendi, see what they are doing for their constituents. We are saying enough is enough. If he can not bring development to us, he should set aside for more capable ones to come.”

The youth also claimed that the inner roads of the Bimbilla constituency capital, are full of potholes residents making it difficult for drivers to easily move around.

The hospital which is the main referral centre on the Eastern corridor is without a mortuary. The mortuary fridge has been spoilt for about a decade now and residents do not have a place to keep their dead.

“Look at Bimbilla town roads, full of potholes and the hospital too has no mortuary. The fridge in the mortuary got spoilt for over ten years now. At Yendi when Farouk wanted to contest, he went and worked on the mortuary at the hospital, he renovated it, refurbished it and now the Yendi mortuary is working”.

See also  Audio: God Will Punish You If You Don't Construct Other Roads Too - Kate Gyamfuah Jabs Amoako Atta

The youth are, therefore, calling on the MP not to contest in 2024 else they’ll campaign against him