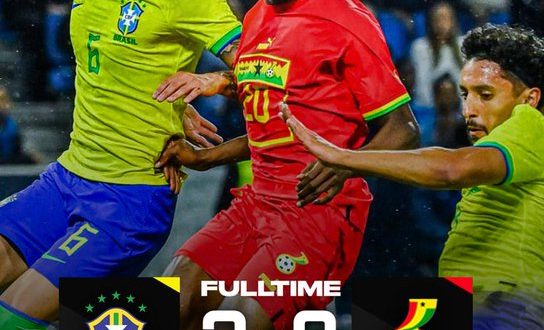 Five-time World champions Brazil handed a Ghana a reality check by thumping the Black Stars in a pre-World Cup friendly on Friday night.

The Seleçao recorded a comfortable 3-0 victory at the Stade Oceane in Le Havre, France with a total dominance right from the start of the match.

The 2022 World Cup favourites extended their unbeaten run to fourteen matches with the resounding victory.

Ghana were dealt a huge blow when star man Thomas Partey picked up a knock during warming up and was replaced by Baba Iddrisu Mohammed in the lineup.

The Black Stars had the first shot on target after Felix Afena-Gyan’s effort was feeble to beat goalkeeper Allisson after just four minutes into the game.

The Seleçao got the opening goal of the match in the 10th minute through PSG defender Marquinhos who got on to a free header to slot home a corner-kick from Raphinha.

Brazil doubled their advantage in the 28th minute after Richarlison scored in his fifth consecutive game with a sweet finish having being set up by Neymar.

Richarlison scored again five minutes from the break to increase the tally for the Brazil after getting onto a freekick by Neymar to head the past helpless Ghana goalkeeper Joseph Wollacott.

Ghana were a much improved side in the second half following the substitutions by Addo.

Williams, Salisu and Lamptey were brought on to mark their international debuts for the four-time African champions.

The Black Stars nearly pulled one back some minutes after the break but Andre Ayew’s header from corner-kick went against the crossbar.

Brazil came close to getting their fourth goal of the night in the closing stages of the game but goalkeeper Wollacott produced a fantastic save to deny Rodrygo from close range.

Thanks for reading from  MyGhanaMedia.com as a news publishing website from Ghana.