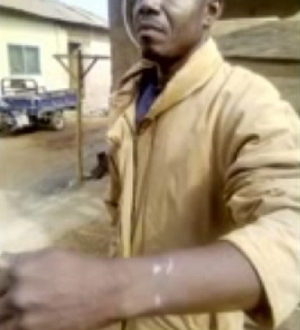 Four personnel of the Ghana Police Service in the Bono Region have been accused of brutalising an assistant environmental health analyst at Sene West District Assembly in the Bono Region after he allegedly refused to pay a GH¢5 bribe.

According to a Peace FM report, the police officers, who are stationed at Kwame Danso a suburb of the Sene West, asked the victim; James Combat, to pay GH¢5 for committing a road traffic offence.

The report indicated that Combat refused to pay the money which led to the police beating him up mercilessly.

Narrating his ordeal in a Peace FM interview, the assistant environmental health analyst said that the police stopped him on his way to his farm for riding his motorcycle without a helmet.

He said that he explained to the police that he had only one helmet which he gave to his daughter, who was on the motor with him, but the police insisted that he pays the GH¢5.

“I told Peter (one of the policemen) that I had no money on me because I was on my way to my farm. Then Doe and Akomea (two senior policemen) instructed him (Peter) to remove my motor key if I am not willing to pay the GHC5,” he said in Twi.

Combat said that he took his motor key and refused to give it to the policemen which led to the beatings.

“My daughter was on the floor weeping as they were beating me up mercilessly. They forced me into their vehicle took me to the police station and they kept me in cells from 8:00 am to around noon,” he said

The victim also added that he was only released after some officers of the Sene West District Assembly and his family raised an amount of GH¢700 to pay the police.