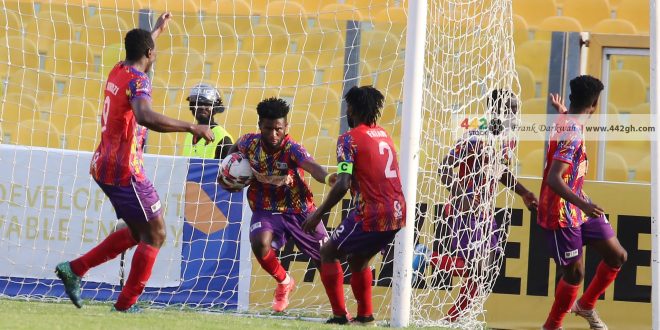 Accra Hearts of Oak recorded a 2-0 victory over Algerian side, JS Saoura  in Accra in the first leg of their CAF Confederations Cup playoff tie.

Goals from Salifu Ibrahim and Agyenim-Boateng in either half ensured the Ghana Premier League champions get the upper hand ahead of the return leg in a week’s time.

The Phobians started the game brilliantly and should have been ahead in the opening 10 minutes but poor decision making in the final-third cost the team.

Kofi Kordzi, after an intricate set of passes by Samuel Boadu’s men could not find the back of the net after a fantastic block by the JS Saoura defense before the striker blasted his effort wide.

The persistence of Hearts of Oak would pay off, with Salifu Ibrahim heading home the lead after a brilliant piece of display and cross by Daniel Afriyie-Barnieh.

Hearts of Oak threatened for more but couldn’t double their lead in the first half with JS Saoura struggling to create any meaningful chance in the first 45 minutes of action.

Hearts of Oak started the second half just as they did the first, on the attacking front, beating Saoura for pace, with the U-20 winning star, the centre of everything good for the Phobians.

Samuel Boadu’s side will get the cushion they were looking for on the 71st-minute mark, with Agyenim-Boateng doubling Hearts’ lead.

Things will go from bad to worse for the visiting side after their goalkeeper Saidi got sent off, receiving a second yellow card and handicapping his side against a resilient Hearts of Oak side who looked more promising.

Hearts of Oak will now travel to Méridja on 5th December, 2021 for the second leg.