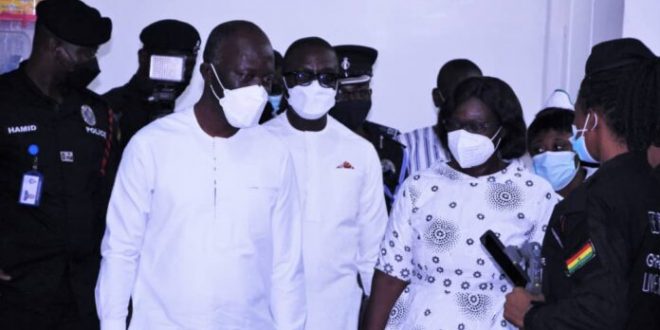 The Inspector-General of Police, Dr George Akuffo Dampare, on Sunday, November 28, 2021, visited Police officers on admission at the Eastern Regional Hospital in Koforidua after they were involved in a near-fatal accident.

The IGP dashed to the hospital to sympathize with five police officers -a female and four males – still on admission.

He subsequently visited those discharged in their homes.

He assured that the entire police administration is behind them and will do everything possible to ensure they recover quickly hale and hearty.

IGP commended clinicians at the hospital for the quality healthcare administered to the victims stabilizing their conditions and facilitating the recovery process.

Chief Superintendent Alexander Obeng, Director of Public Affairs at Ghana Police Service told Starr News that, the IGP will visit the various homes of the 12 victims treated and discharged.

“There was a serious crash and about 17 of our Personnel -Five have been hospitalized here who are in critical condition. The IGP when he heard it left everything he was doing as he usually does and proceeded to this Hospital and encouraged them and assured them of the administration’s support for all of them so they are fully recovering. The rest he is going to visit them in their various homes that is what he intends doing,” He said.

Seventeen (17) Police officers of the Eastern Regional Police Band stationed at the Regional Police Headquarters were involved in a near-fatal accident on Apirede Akuapem to Somanya road on Saturday, November 27, 2021.

The Police Officers were aboard a Mercedes Sprinter bus from Koforidua to Somanya for an official duty however on reaching a section of the road the civilian driver allegedly failed brake while descending a hill, therefore, lost control of the steering wheel and violently crashed into the bush.

The victims rushed to Atua Government Hospital have been treated and discharged while five who were in critical conditions were referred to the Eastern Regional Hospital for intensive care.

I'm Adwenpa-Hene |Blogger & Broadcaster Journalist. I am the CEO and manager of this noble website. I publish on Entertainment, Sports, Politics, Lifestyle, and Technology. You can also follow Us on : YouTube Channel - My Ghana Media TV, Facebook - MyghanaMedia TV , Twitter - @MyGhanamedia2 & Instagram - My Ghana Media TV. Email Address: myghanamedia@gmail.com Contact Us: 0200818719
@@MyGhanamedia2
Previous CAFCC: Hearts of Oak Recorded 2-0 Victory Over Algerian Side, JS Saoura
Next Rejection Of ‘Agyenkwa’ 2022 Budget: Majority Should Take The Matter To Court – Lawyer