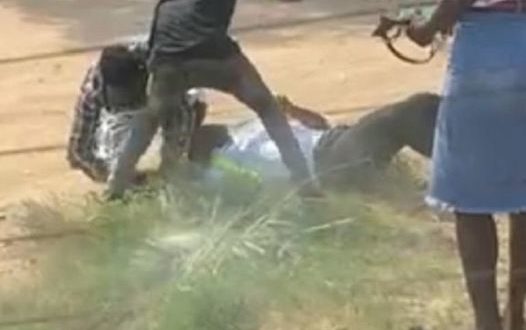 Central Region: ‘Trotro’ Driver And Mate Beat Policeman, Drag Him On The Floor

A video circulating on social media shows how a ‘Trotro’ (commercial vehicle) driver and his mate (conductor) severely assaulted a police officer in uniform in Cape Coast.

The video captured the police officer being dragged on the ground by the driver and his mate and given severe beatings.

A situational report following the incident indicates that on Monday, December 12, 2022, the police officer was directing traffic at the University of Cape Coast main gate and the driver and his mate were on board a Mercedes Benz Trotro (Commercial Vehicle) from Elmina, heading towards Accra.

According to the report, on reaching UCC gate, they were arrested by the officer for a Motor Traffic offence and were asked to drive the vehicle to the police headquarters at Pedu in the Central Region.

The aforementioned driver then notoriously drove the car past the police headquarters and stopped later at the Hacienda Hotel in Cape Coast, brought out the police officer who was inside the car and subjected him to severe beatings until he was rescued by nearby passers.

The incident was captured by an eyewitness who happened to be at the scene at the time of the incident and it was circulated.

Close sources to the police say that the said driver, identified as Jephter Boateng and his accomplice (mate) Sadick Arthur are currently in custody assisting the police with investigations.

See also  NDC’s Worst Defeat Is Not Yet Here, We Will Deliver That In 2024 Elections – John Boadu

I'm Adwenpa-Hene |Blogger & Broadcaster Journalist. I am the CEO and manager of this noble website. I publish on Entertainment, Sports, Politics, Lifestyle, and Technology. You can also follow Us on : YouTube Channel - My Ghana Media TV, Facebook - MyghanaMedia TV , Twitter - @MyGhanamedia2 & Instagram - My Ghana Media TV. Email Address: [email protected] Contact Us: 0200818719
@@MyGhanamedia2
Previous US-Africa Summit: Joe Biden Says US Is ‘All In’ On Africa’s Future
Next Man Who Slapped Greater Accra Regional Minister Granted Bail