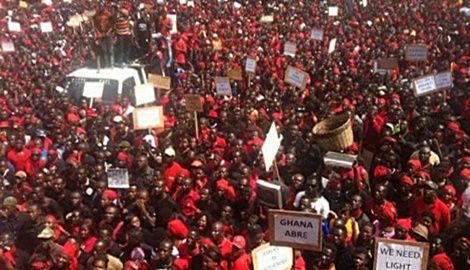 Court to Arise Ghana: You Can’t Demonstrate At Night

The Criminal Division of the Accra High Court has partially granted an application from the Ghana Police Service to restrain and prohibit Arise Ghana from embarking on a demonstration which sought to end at 10 pm.

DSP Sylvester Asare made references to reports of terrorism in neighbouring country Togo to argue their case and wanted the demonstration to end at 3 pm.

Counsel for the Respondent (Arise Ghana) led by Godwin Edudzie Tamakloe argued that the police has not demonstrated how the Togo terrorism which took place in the afternoon comes to play in a demonstration which was to be held in Ghana at night.

The bone of contention between the Police and Arise Ghana which landed in court was the venue for the demonstration and the time it would be ending.

The court also said, the intended demonstration should start at 8 am and end at 4 pm.

The said petition the court said should be received by a representative of the President if any.

Bernard Mornah, a member of Arise Ghana Movement said the group will comply with the court’s order.

Meanwhile, ahead of the court sitting, the leading member of the Arise Ghana Movement, Mensah Thompson, served notice that the pressure group will still go ahead with its planned night demonstration, despite concerns raised by the police.

I'm Adwenpa-Hene |Blogger & Broadcaster Journalist. I am the CEO and manager of this noble website. I publish on Entertainment, Sports, Politics, Lifestyle, and Technology. You can also follow Us on : YouTube Channel - My Ghana Media TV, Facebook - MyghanaMedia TV , Twitter - @MyGhanamedia2 & Instagram - My Ghana Media TV. Email Address: [email protected] Contact Us: 0200818719
@@MyGhanamedia2
Previous GFA : Players Without Ghana Card Won’t Be Registered For 2022/23 season
Next All Is Set For Historic Arise Ghana Demonstration