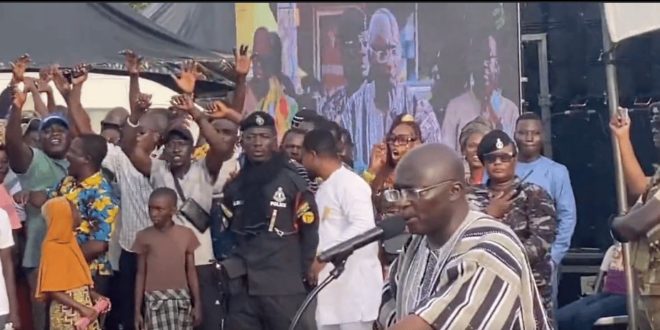 A member of the Hogbetsotso Planning Committee has divulged what he believes got the Vice President, Dr Mahamudu Bawumia booed over the weekend in the Volta Region.

According to Agbotadua Kumasah, prior to the Vice President’s entry, the spectators were cautioned against “embarrassing any invited dignitary.”

However, Mr Kumasah said, the crowd spiraled out of control when Dr Bawumia began listing some non-existent achievements chalked by the incumbent government.

“When the Asantehene and Kwahumahene spoke, people applauded them. When he [Bawumia] started speaking, he talked about the unity between the Anlos and the Asanteman. And the people were enjoying and even clapping for him. But when he mentioned the economic situation that is when the trouble started.” he told Emefa Apawu.

Mr Kumasah was speaking on JoyNews’ The Probe on Sunday.

“He mentioned among others that they [NPP government] have built more airports, roads than any other government. And the people who were there did not see the roads, airports and universities he was referring to so that brought some agitation and it became very difficult to control the people because none of what he was saying has happened in the area,” he stated.

On Saturday, Dr Bawumia was at the receiving end of jeers at Anlo.

The boos and chants of disapproval drowned the rest of his delivery as he shouted atop his voice.

You don’t take your dirty politics to the good people of “ANLO” ….

While the noise grew louder, Dr Bawumia added that “there are many people who don’t like good news but this is good news.”

This is not the first time, leaders of the country have been hooted at in public.

In September, President Akufo-Addo was also booed at the Global Citizen Festival in Accra with his convoy subsequently suffering a similar fate later in Kumasi.

Akufo-Addo booed massively at the Global Citizen Festival. It's so fantastic! pic.twitter.com/VZK1yWfElz

The Ashanti regional episode occurred on Monday, October 17, when the President was inspecting the Phase II of the Kejetia/Central Market Project.

I'm Adwenpa-Hene |Blogger & Broadcaster Journalist. I am the CEO and manager of this noble website. I publish on Entertainment, Sports, Politics, Lifestyle, and Technology. You can also follow Us on : YouTube Channel - My Ghana Media TV, Facebook - MyghanaMedia TV , Twitter - @MyGhanamedia2 & Instagram - My Ghana Media TV. Email Address: [email protected] Contact Us: 0200818719
@@MyGhanamedia2
Previous 30% Salary Cut: I Was Paid GH¢310 Due To Deducted Arrears – KMA Mayor
Next CETAG, CENTSAG Threaten To Strike Over Welfare Concerns

Spread the love The Vice-President of the Republic, Dr Mahamudu Bawumia will on Tuesday (31 …