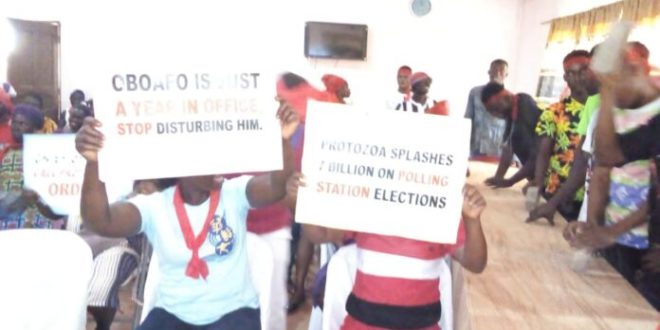 A group calling itself Concerned Youth of Suhum in Eastern Region have accused a presidential staffer,  Frank Asiedu Bekoe popularly known as Protozoa of influencing the polling station executives and electoral area coordinators elections with money in his quest to unseat the Member of Parliamentary Oboafo Kwadwo Asante.

The aggrieved youth group alleged that, the Presidential staffer who is also Special Assistant to the Chief of staff, Frema Osei Opare in collusion with the Municipal Chief Executive for Suhum, Margaret Darko have created disunity in the party and undermining the member of Parliament .

The convener of the group Samuel Baah alias Gosh said during a press conference that, “The MCE for Suhum has turned her official residence into championing a parliamentary ambition of a Presidential staffer,  Frank Asiedu Bekoe popularly known as Protozoa. Apart from using public property for a private parochial interest she has been using her office to undermine the member of Parliament Hon Oboafo Kwadwo Asante .

“The MCE is on record instigating party supporters against the MP,again the MCE is using resources meant to support the disable in the Constituency to support the agenda of the Presidential staffer which we think is callousness”.

He provided what appeared a picture evidence though not independently verified to demonstrate that the Presidential staffer and the MCE were bribed voters during the recent internal election.

“In the just ended NPP polling station and electoral area coordinators election ,the MCE and Frank Asiedu Bekoe , distributed times such as hair dryers ,pieces of cloths , spraying machines and amount of money to induce electorate to influence the outcome of the party internal election. He spent billions to induce electorate which included vote for staunch NDC members to become NPP polling station executives. A team formed by Protozoa was seen in the open sharing Ghc50 each to all who have queued to vote in the polling station election.if one only presidential staffer can spray out money just in a polling station election .Would Sharing and spraying of cash be made during the general election?

The group said there is total disunity and volatile political environment in the party due to the actions of the MCE and the Presidential staffer.

“The MCE and the presidential staffer are disturbing the peace and will affect the fortunes of the party in the Constituency. They instigate supporters to cast aspersions at the MP at social events including funerals”.

The group warn that ,they may be forced to recall the Member of Parliament ,Oboafo Kwadwo Asante ,to leave Parliamentary businesses to come to the base of the party to work.

“We are therefore by this press conference sending a strong signal to the NPP caucus in Parliament and office of the chief of staff as well as the Presidency that we are tired of this happenings going on in the Constituency and that we are from next week 28 March 2022 going to pull the Suhum MP,  Oboafo Kwadwo Asante out of Parliament to counter the weired situation happening on grounds we have tolerated this for long time for the purpose of peaceful atmosphere but it is time we call a spade a spade”.

Friction between the camp of the MP and Protozoa and the MCE led to many bloody clashes.On August 28,2021for instance, a communication officer for Lower West Akyem Bernard Kwasi Amoani was slashed in the forehead with machete ,three others sustained minor injuries.