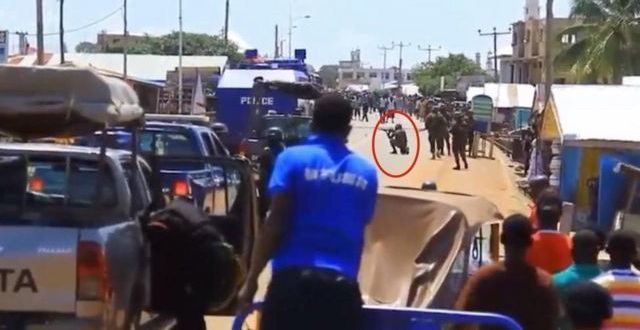 The government has fulfilled the pledge to pay compensation to families of the two youth who were killed during a disturbance in the Ashanti Region town of Ejura last year.

The deputy minister for the Interior Naana Eyiah Quansah on Saturday (5 February), handed over a cheque of GHC250,000 to each family totalling GHC500,000.

The victims, Abdul Nasir Yussif and Mutala Suraj Mohammed died when they sustained gunshot wounds during a protest over the murder of a social media activist, Ibrahim Mohammed aka Kaaka on 29 June 2021.

Four others sustained various degrees of injury in the shooting said to have fired by soldiers during the protest.

A three-member committee set up to investigate the matter recommended a compensation package for the affected victims and their families.

Speaking on the sidelines of a brief ceremony to present the cheques to the families, a member of the delegation, Ben Abdallah Banda said the presentation was made in fulfilment of a promise made by the government.

He further advised the youth in the town to channel their energies into the development of the town.

Representatives of the families were thankful to the government for fulfilling its promise.

They, however, want the government to put measures in place to avert such deadly violence in the area.

I'm Adwenpa-Hene |Blogger & Broadcaster Journalist. I am the CEO and manager of this noble website. I publish on Entertainment, Sports, Politics, Lifestyle, and Technology. You can also follow Us on : YouTube Channel - My Ghana Media TV, Facebook - MyghanaMedia TV , Twitter - @MyGhanamedia2 & Instagram - My Ghana Media TV. Email Address: [email protected] Contact Us: 0200818719
@@MyGhanamedia2
Previous E/R: Official Vehicles Of GES Director, Accountant Seized Over Judgement Debt Won By Aggrieved Teachers
Next Prices Of Goods To Go Up By 12% Over Implementation Of Amended VAT – IEAG