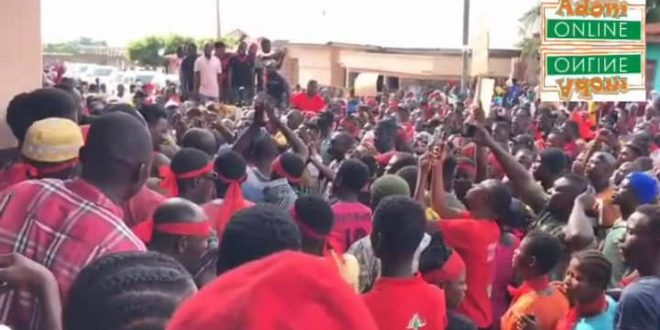 Election 2020: Families Of Casualties In Techiman South Violence To Get 4-Bedroom House

Techiman South Member of Parliament (MP), Martin Adjei Mensah Korsah, says the families of two persons who died as a result of violence in the Techiman South Constituency during the 2020 general election are being given four-bedroom houses as compensation.

He says support has also been extended to those who got injured and their medical bills have been taken care of.

Apprentice Abdallah Ayarick, 18, and one Tajudeen Alhassan, lost their lives when security personnel fired shots to disperse a crowd that had gathered at the collation center on 8th December 2020.

Nine others were recorded to have sustained various degrees of injuries following the shooting.

Mr Korsah, who has been appointed as Deputy Minister for Local Government and Decentralisation-designate, disclosed details of the support in response to questions from MPs when he appeared before Parliament’s Appointments Committee on Friday to be vetted for the position.

“The event as sad as it was has brought us together because of the pursuit of unity. I personally, on my own, as father of the constituency have taken some steps. You can’t bring back life lost. But (there is) some measure of support to the family and cushion for them,” he said in response to a question from Ejisu MP, John Kumah.

“As I speak in this room, that closer collaboration in search of unity, one young man who lost his life, Abdallah Ayaric, the parents are sitting behind me in support of my vetting. That is the unity we want to see at Techiman.

“There is another who lost his life, Tajudeen Alhassan. Like I said, (there is) some measure of support. We have decided to provide some shelter for the family because it was their wish and so a four-bedroom house is being put up to support the family. The same equivalent of support is being extended to the other family.

See also  EC Not To Blame For Violence, Deaths During 2020 Polls – Jean Mensa

“Those who got injured, some of the hospital bills had to be taken to be sure they are back on their feet to go on with their lives… So almost all of them, we have close relationship with them and assisting them to get back…” Mr Korsah added.

Victoria Mensah, mother of 18-year-old Ayarick, who was present at the vetting to support Mr Korsah, said the family is counting on him to get them justice and compensation.

“We are counting on the MP to get the necessary compensation and justice from government for us. My son is the MP’s nephew. He has to work and ensure there is justice for the family.

“I am really saddened that we lost him. I knew he was going to be a great person for the family,” she told Joy News in an interview.

Mr Korsah condemned the violence, saying it shouldn’t have happened. He assured that there will justice. “I do accept and agree that unity is important but justice must go with that. We’ve petitioned various bodies.

“Some investigations conducted by the police are ready. We have lent some support to action taken by some friends in the Minority in Parliament. We regret what happened. It shouldn’t have happened. It was reckless,” he observed.

“We are very committed to ensuring there is justice for those who lost their lives and those who got injured,” Mr Korsah told the Appointments Committee.