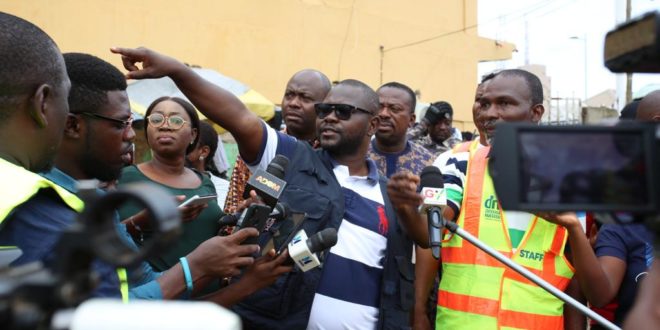 The Ministry of Works and Housing has charged the local authorities such as the municipal district assemblies (MDAs) to enforce the bye-laws to prevent flooding in Accra.

According to the sector Minister, Francis Asenso-Boakye, the district assemblies are empowered by the Local Government Act to ensure that, for instance, building permits are issued appropriately and not anyhow.

“Haphazard development of our communities is another major cause of flooding in the capital city. Whenever you are supposed to build you have to go and request for a building permit from the district assembly, and most people don’t do that.

Mr. Asenso-Boakye made the call when his ministry, in collaboration with the National Disaster Management Organisation (NADMO), on Sunday afternoon embarked on an assessment tour of areas in Accra that were hit by flood, following last Saturday night heavy downpour.

The visit also enabled the minister and his team to see for themselves the impact of last Saturday’s downpour in especially flood-prone areas in Accra.

The areas visited included Odawna Garages in the Korle-Klottey Municipal Assembly, Iran Clinic at Adabraka near the Circle Overhead Bridge, Odawna, Circle, Adabraka and Asylum Down.

The rest were Circle Neoplan Station, Osudoku, Pharma Nova, Tintara all in Osu, and Tsaado in Teshie.

While admitting that the size of the drains was a contributory factor to floods in Accra, the minister said the government, over the last five (5) years, has invested GHC450 million in the expansion of drainage works in the capital city.

These, he said, have included drain deepening, concrete lining and increasing of the capacity of the drains to be able to carry storm water to prevent floods.

He was, however, quick to add that there were other causes of flooding besides the size of the drains.

“The first one is the indiscriminate dumping of solid waste into the drains and the other one which is equally important is the haphazard development of our communities,” he pointed out.

He noted that in areas such as Odawna which needed serious engineering works, the government has put in place remedial measures to mitigate the impact of floods.

For his part, the Operations Manager, Accra Sanitary Sewer and Storm Alleviation Project (ASSSAP), Mr. Bernard Amu, stressed that but for the ongoing dredging and siltation works in the Odaw and Korle Lagoon the flooding in parts of Accra last Saturday would have been “very serious.”

On that score, he stressed the need for continuous maintenance dredging and annual siltation of the Odaw and Korle.

He said dredging was a continuous process, adding that there was also the need to enforce the bye-laws to stop residents from dumping refuse into the drains.

He also reinforced that it was crucial to intensify the education of residents around the banks of rivers to keep their environs clean.

I'm Adwenpa-Hene |Blogger & Broadcaster Journalist. I am the CEO and manager of this noble website. I publish on Entertainment, Sports, Politics, Lifestyle, and Technology. You can also follow Us on : YouTube Channel - My Ghana Media TV, Facebook - MyghanaMedia TV , Twitter - @MyGhanamedia2 & Instagram - My Ghana Media TV. Email Address: [email protected] Contact Us: 0200818719
@@MyGhanamedia2
Previous It’s Possible Ghanaians Have Been Recruited By Terrorists – Information Minister
Next NPP’s Sir John Calls For Unity Ahead Of Party’s’ Regional Elections