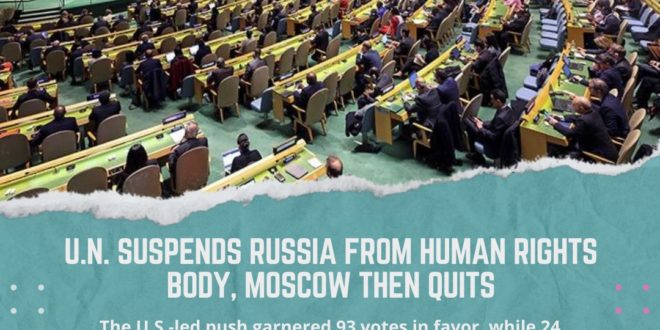 Ghana abstained as the UN General Assembly adopted a resolution on Thursday, April 7, 2022, calling for Russia to be suspended from the Human Rights Council.

The resolution received a two-thirds majority of those voting, minus abstentions.

The 193-member assembly had 93 nations voting in favour of the resolution and 24 against it.

Russia, China, Cuba, and North Korea were among the countries who voted against the resolution

The meeting to consider the resolution marked the resumption of a special emergency session on the war in Ukraine.

The meeting came as Ukraine accused Russia of committing war crimes in Ukraine.

This past weekend, photos and accounts have emerged from the city of Bucha, a suburb of the capital, Kyiv, where hundreds of civilian bodies were found in the streets and in mass graves following Russia’s withdrawal from the area.

Prior to the vote, Ukrainian Ambassador, Sergiy Kyslytsya, urged countries to support the resolution.

After the vote, Ukrainian Foreign Minister, Dmytro Kuleba, thanked the members who voted in favor of removing Russia from the council, saying, “war criminals have no place in UN bodies aimed at protecting human rights.”

Russia had been serving a three-year term on the 47-member council.