Breaking News
Home / GENERAL NEWS / Ghana Cedi Woes: We Are Looking For Dr. Bawumia But We Can’t Find Him; IGP Must Help Us Find Him – Mahama 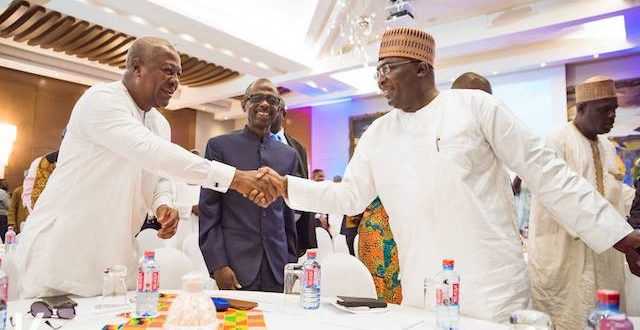 Ghana Cedi Woes: We Are Looking For Dr. Bawumia But We Can’t Find Him; IGP Must Help Us Find Him – Mahama

The former President of Ghana, Mr. John Dramani Mahama has said the Akufo-Addo administration has badly managed the economy.

In his view, the country is facing economic and social hardship due to the poor governance of the current administration.

Mr Mahama said these while speaking at the launch of an App for the Tertiary Educational Institutions Network TEIN of the National Democratic Congress NDC, held at the University of Professional Studies, Accra (UPSA) Auditorium in Accra on Monday March 21.

He said “hardship in the country has led the nation to a scale we have never witnessed in the last 30-years of our fourth republic.

“Daily price increases, fuel price adjustments and nose-diving currency which has rather arrested the person who said he had arrested it. The dollar has rather arrested him. So we are looking for him we can’t find him. We will ask the IGP if he has the key so that we could find where our Vice President was.”

“We are gathered at the time when our country is facing economic and social hardship. The Akufo-Addo led government that came to power on the back of mouth-watering promises to make life better for Ghanaians and ensure rapid development of our country has so badly mismanaged the economy. We have been plunged into the most debilitating economic crisis in our four decades,” Mr Mahama added.

I'm Adwenpa-Hene |Blogger & Broadcaster Journalist. I am the CEO and manager of this noble website. I publish on Entertainment, Sports, Politics, Lifestyle, and Technology. You can also follow Us on : YouTube Channel - My Ghana Media TV, Facebook - MyghanaMedia TV , Twitter - @MyGhanamedia2 & Instagram - My Ghana Media TV. Email Address: [email protected] Contact Us: 0200818719
@@MyGhanamedia2
Previous Akufo-Addo Has Instructed That All Flagship Programs Including Free SHS Should Be Up For Review’ – Information Minister Hints
Next Ghana Drops From 95th To 111th In 2022 World Happiness Ranking