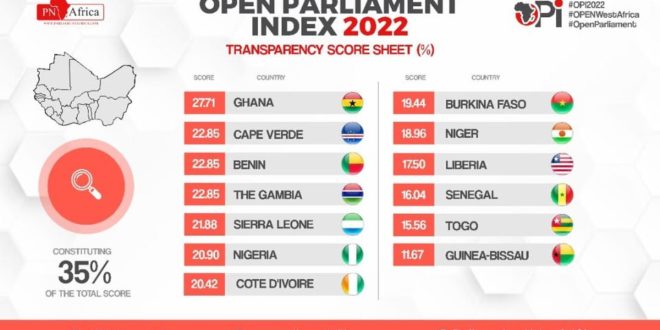 Ghana has been adjudged the country with the best Parliament according to the Africa Open Parliament Index (OPI).

The Index was launched under the auspices of the Parliamentary Network Africa (PNAfrica) and the Africa Parliamentary Monitoring Organizations Network (APMON).

The Index which has assessed the openness of Parliaments in Africa was launched on Wednesday, 20th July 2022, in Accra – Ghana under the distinguished patronage of the RT. Hon. Speaker of Ghana’s Parliament, Alban Sumana Bagbin.

The Africa OPI is a joint effort with the APMON Working Group, which is made up of renowned parliamentary monitoring organizations in Africa namely, Mzalendo Trust (Kenya), Ghana Centre for Democratic Development (CDD-Ghana), Parliamentary Monitoring Group (South Africa), Africa Parliamentary Press Network (APPN), and the Pan African Parliament Civil Society Forum which is coordinated by the Center for Human Rights of the University of Pretoria. It also received technical support from Directorio Legislativo, an Argentina-based organization which co-founded the Latin America Legislative Transparency Index and Network about a decade ago.

The Open Parliament Index (OPI) which uses the three criteria of Open Parliament: Transparency, Civic Participation and Public Accountability, to assess Parliaments across Africa would be subsequently released every two years.

This criterion has been chosen considering the standards of the Open Government Partnership (OGP), the Principles of Parliamentary Openness and the Inter-Parliamentary Union’s (IPU) Indicators for Democratic Parliaments.

The Index will enable civil society to work together with national and regional parliaments to identify systemic challenges to achieving parliamentary openness and to co-create reforms that will strengthen the capacity of parliaments to enhance their openness.

Infographics representing how each country in the West African region ranked on the Transparency Score Sheet. The total score constitutes 35% and Ghana ranked first.

Infographics representing how each country in the West African region ranked on the Public Accountability Score Sheet. The total score constitutes 30% and Cape Verde ranked first with 15.68 %

Infographics representing how each country in the West African region ranked on the Civic Participation Score Sheet. The total score constitutes 35% and Cape Verde ranked first with 23.33%

The rationale for the Index includes:

Empower parliamentary monitoring organizations (PMOs) and Parliaments to monitor the level of progress in enhancing the principles of open parliament; Document parliamentary best practices towards supporting parliaments to be more open; and Leverage the partnership between civil society and parliaments to co-create parliamentary reforms, policies and action plans that strengthen institutions of parliaments to effectively perform their role of oversight, law-making and representation.

Dr. Amanda Coffie, Board Member of the Parliamentary Network Africa, indicated in her opening remarks that Due to the increasing concerns of instability and popular authoritarianism (military coups) across West Africa, Parliaments’ role has become more critical to maintaining democratic governance and ensuring that there is peace and stability across the sub-region. She however emphasized that, this cannot be achieved with weak and opaque Parliaments.

“The more Parliaments are open, the better the trust that citizens have in governments to provide equal opportunities and environment to sustain the political, social and economic development, while maintaining stability within a nation,” she said while adding that it was the reason the Parliamentary Network Africa (PNAfrica) together with the African Parliamentary Monitoring Organisations Network (APMON) created the Africa Open Parliament Index (Africa OPI).

The Rt. Hon. Speaker, Alban Sumana Bagbin, in a speech read on his behalf by the First Deputy Speaker, Joseph Osei Owusu, pledged his support for the initiative which would help shape Parliamentary democracy on the continent while ensuring that Parliaments are open and accountable to the people on behalf of whom they are working.

According to the Executive Director of PNAfrica, Sammy Obeng, “what does not get measured does not get done” and therefore the introduction of the Open Parliament Index, “would help track the progress of African Parliaments which form the backbone of thriving democracies and offer assistance where there may be shortfalls.”