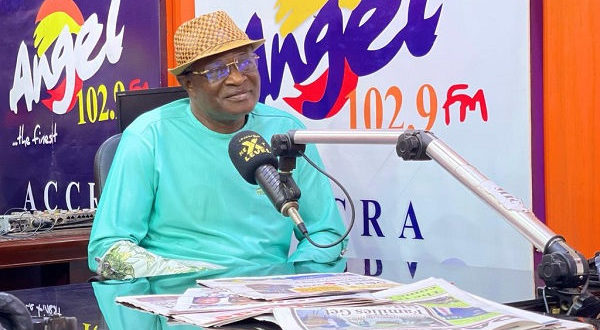 ‘Government Has Neglected Us Due To Politics’ – GNAFF

The President of the Ghana National Association of Farmers and Fishermen (GNAFF), Nene Terkpertey Agbleze I, has intimated that their disregard by the government has been due to politics.

GNAFF has for the past five years been complaining about the Nana Akufo-Addo led administration neglecting its members despite being directly affected by the government’s programmes and policy implementations.

It would be recalled that during the celebration of Famers on December 3, 2021, the Public Relations Officer of GNAFF, Nana Oboadie Bonsu, called for the removal of the coordinators of the said event.

According to him, the organizers have failed to officially invite them for the celebration for the past five years adding that not a place was apportioned for farmers to exhibit their produce for the crop seasons of the year.

They also complained bitterly about the government not distributing fertilizers to the farmers through the right channels−the apex body, GNAFF−allowing some intermediaries to take advantage of their positions to rip the government off and impacting them negatively in the end.

See also  Akufo-Addo: My Ministers Outstanding; I Have No Strong Reason To Reshuffle

However, speaking on the Anopa Bofoↄ show on Monday, February 7, 2022, Nene Terkpetey Agbleze I, revealed that they have been sidelined by the government because his predecessors decided to openly declare their political stance.

Stating that his administration has remained apolitical due to his principle to solely depend on farming to meet the demands of the economy, the president of the association noted that the executives met with the sector Minister in a quest to resolve the issue but came to naught.

“They [NPP government] have formed a new association with which they work. We have met with the Agric Minister [Dr. Afriyie Akoto] to liaise with his Ministry but he disagreed to work with us,” Nene Terpketey Agbleze revealed on the show hosted by Kofi Adoma Nwanwani on February 7, 2022.

He also decried the failure of the governments to formulate national policies and to act according to the same, which he said accounts for the country’s slow growth.

“Each government comes with its own plans and when they are leaving office, they take it away. These things don’t help the country to develop,” he lamented.

I'm Adwenpa-Hene |Blogger & Broadcaster Journalist. I am the CEO and manager of this noble website. I publish on Entertainment, Sports, Politics, Lifestyle, and Technology. You can also follow Us on : YouTube Channel - My Ghana Media TV, Facebook - MyghanaMedia TV , Twitter - @MyGhanamedia2 & Instagram - My Ghana Media TV. Email Address: [email protected] Contact Us: 0200818719
@@MyGhanamedia2
Previous E-levy Is Not Panacea For All Our Problems – Deputy Finance Minister
Next GNAT Protests Against Basic Education Skills Examination Test Proposed By NTC