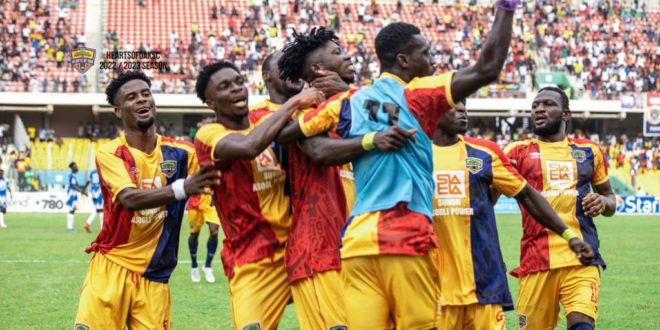 It is now confirmed that, Ghanaian giants Accra Hearts of Oak will face Malian side AS Real Bamako in the second preliminary round of the 2022/23 CAF Confederations Cup after their victory over AS Douanes earlier today.

Our journey in the CAF competition starts against Real Bamako of Mali.
We start on the 7th October, 2022. #AHOSC#PositiveEnergy#Phobia4Life pic.twitter.com/r4f9PVL8R0

The 2004 champions were picked among the few clubs to have been excused from the first qualifying round and were awaiting the winner of the clash between Mali’s AS Real Bamako and Burkinabe side AS Douanes.

The tie was concluded today and it was the Malians who emerged victorious with a 3-1 on penalties victory after the two legs had ended in a goalless draw.

Hearts of Oak dropped into the playoff round of the Confederations Cup last season after being eliminated by current African champions WAC in the Champions League, but once again lost embarrassingly to Algerian side JS Saoura to miss out on the money zone and will look to perform beyond that this time around.

The first leg is scheduled for the weekend of 7th-9th October, with the return encounters also expected to happen from 14th-16th October, 2022.