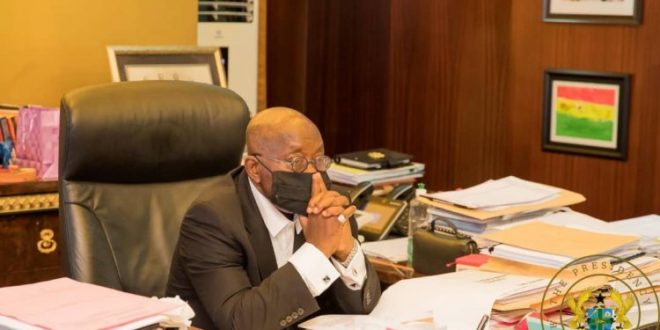 President of the Republic of Ghana,  Nana Addo Dankwa Akufo-Addo says he has not given up on his quest to amend Article 55 (3) of the 1992 constitution to pave way for the election of Metropolitan, Municipal and District Chief Executives (MMDCEs) on partisan basis.

He maintains that a repeal of the law that prohibits political parties from sponsoring candidates for elections at the local level will deepen decentralization and democracy in the country.

In 2019, the Akufo-Addo administration initiated moves to democratize the selection of leaders at the local government level with a proposal for the amendment of Article 243 (1) and a further amendment to Article 55 (3) of the Constitution, to enable political parties to participate in local level elections.

But the plan hit a dead end following a lack of bipartisan backing for the referendum to amend Article 55 (3), pushing the President to withdraw these reforms.

Nana Akufo-Addo, while addressing the nation on the 30th anniversary of the referendum approving the 1992 Constitution, said it will still not be out of place for these discussions to be had again.

“I have said it before and I will repeat it, I will continue to work for the extensive national consensus on this issue and should such a consensus be attained for a repeal of Article 55 (3) of the constitution and an agreement reached for political parties to partake and sponsor candidate for elections in the district assemblies.”

“At any point during the remainder of my tenure of office as President of the republic, the matter will be brought back again to the front-burner of our public discourse for the necessary action. I am hoping after completing the necessary consultation, I will surely be in the position to announce the way forward on this important matter”, he said.

Although the 1992 Constitution, in Article 55 (3), gives the mandate for the organisation of political party elections, it excluded the election of Metropolitan, Municipal and District Chief Executives.

Article 55(3) states that “Subject to the provisions of this Article, a political party is free to participate in shaping the political will of the people, to disseminate information on political ideas, social and economic programmes of a national character, and sponsor candidates for elections to any public office other than to District Assemblies or lower local government units”.

Currently, the President nominates all MMDCEs for confirmation by their assemblies.

But he argued that the turnout of national elections in the fourth republic has been 72 percent; one of the highest in the world with that of non-partisan local government elections always hovering around 30 percent.

He wants this trend reversed once and for all because no significant commitment has since been made to ensuring the election of MMDCEs.

“One primary goal of the constitution was to decentralize the structure of the country so that government will be brought closer to the people. One fundamental barrier to the realization of this goal has to do with the ramifications of Article 55 clause 3 of the constitution which currently bars political parties’ involvement in district assembly elections and local government.”

“The attempt I made in 2019 to repeal this provision and allow for the participation of political parties in local government was aborted because of the lack of broad national consensus when the opposition NDC signaled its inability to back the repeal. It was and continues to be my view that the repeal or modification of an entrenched clause of the constitution should attract widespread support to make it acceptable and healthy for the body politic. We should further bear in mind the strong attachment of the Ghanaian people to multiparty democratic elections.”