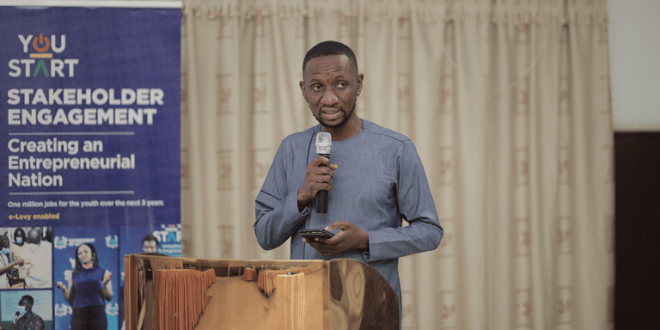 As part of Government’s efforts to have an extensive public engagement on the YouStart Programme before its official launch, the YouStart Secretariat at the Ministry of Finance met with a cross section of Civil Society Organizations (CSO) in Accra.

The stakeholder meeting was among other things to take the CSOs through the YouStart policy structure, its framework, beneficiary groups requirements and seek their support and suggestions before the official launch of the programme.

In his presentation, Mr. Kofi Ofosu Nkansah, Chief Executive Officer of the National Entrepreneurship and Innovation Programme (NEIP), stated that over 100,000 youth look for jobs each year, a condition he described as terrible.

He noted that, most of the big industries and Multi-National Agencies today all started as start-up businesses and underwent transformation over time adding that, there was no better alternative for the youth of the country than to start small as start-ups under the YouStart programme.

Mr. Ofosu Nkansah said, the plan of Government under the programme, was to support all commercially viable innovations from the youth and that, Government had established the right structures and systems under the Ghana CARES programme headed by the Minister for Finance.

According to Mr. Ofosu Nkansah, over $2 Billion was spent on food imports and that was one of the reasons Government was keen to harness the youth potential in areas that could provide alternative solution to the food imports and build the local economy.

He disclosed that the YouStart Secretariat had received unique ideas and proposals from youth and stakeholder interactions across the regions and emphasized that this information was required for the effective operation of the programme.

Mr. Andrew Ameckson a Chief Accountant at the Ministry of Finance in his presentation indicated that, the YouStart programme was anticipated to create 1 million jobs, out of which 800,000 were expected to be direct jobs to the Ghanaian youth.

He further added that, the YouStart was a national programme and that eligible applicants would be given the opportunity and support to contribute their quota to the development of the country.

Number of workers who lost their jobs and were seeking work were estimated to be 187,763, the presentation revealed.

He showed that, 50% of the Ghanaian Youth estimated to be 5,872,229 were classified as under employed, this he explained, as working below one’s capacity and that was why the YouStart was extremely essential to ensure that there was enough capacity building to get the best of the teeming youth.

Ms. Patience Arko Boham, an official of the Ministry, also touched on the features, benefits and eligibility criteria of the YouStart programme. She said that applicants were supposed to have a verifiable digital address, have a Ghana Card and two weeks training to qualify for the programme.

She revealed that, the programme was aimed to target the youth between the ages of 18 and 40 years, and after due diligence of the applications, an amount of GHC 50,000 and GHC 100,000 with 4% interest rate payable within a period of three years would be given to individuals and groups as working capital.

Implementing agencies under the YouStart programme which included NEIP, KPMG, Legacy and Legacy, representatives from the Ghana Association of Banks were present at the meeting.