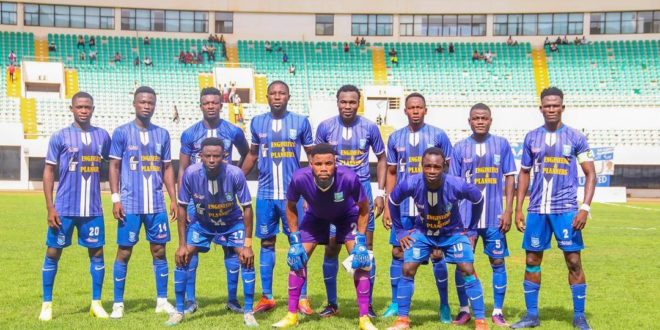 Real Tamale United were able to celebrate their Ghana Premier League survival after producing a stunning performance to defeat Hearts of Oak 4-1 in Accra on Sunday.

The Northern giants knew that a win would be enough to keep them from being relegated, and they delivered by far their best performance of the season to stun the Phobians at Accra Sports Stadium.

RTU got off to a shaky start, falling behind after nine minutes when Hearts of Oak’s Seidu Suraj put them ahead, but it took them ten minutes to respond, with Ronald Frimpong equalising in the 19th minute.

In the 30th minute, David Abagna converted from the penalty spot to give RTU the lead, and by halftime, they were up 3-1 thanks to Frimpong’s second.

They came back from the break to score the fourth goal, sealing a famous win and their safety. It is their first victory over Hearts of Oak since 2011.

Hearts finish the league season outside of the top four, but they have a trophy to fight for next week when they face Bechem United in the MTN FA Cup final.

Eleven Wonders did their job, defeating Aduana Stars at home, but since RTU won, the Techiman-based club have been relegated.

WAFA’s relegation was confirmed on Sunday with a 1-0 loss to Karela United, who finished the season in fourth place.

Wonders and WAFA join Elmina Sharks as the relegated teams this season.

Annor scored his 21st and 22nd goals of the season in a 2-2 draw to surpass Etouga and tie Ishmael Addo’s record for most goals in a single season. Addo set the record in 2002 when he scored 22 goals for Hearts of Oak.