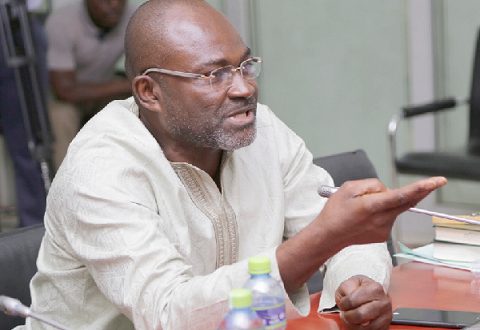 Mr. Agyapong in an interview on his radio station, Oman FM, used some unprintable words at the Tamale MP, and also the Multimedia group.

This is in spite of the fact that he’s expected to face Parliament’s Privileges Committee soon for allegedly threatening a journalist and inciting people to beat him up.

Mr. Agyapong said Mr. Suhuyini is fond of politicizing issues, adding that he’s ever ready to face the Privileges Committee.

“As for Suhuyini, the least said about him the better. He goes ahead to drag me before the Privileges Committee? He is a foolish MP. So stupid. Left to him, the country would have burnt to ashes. I am so disappointed in him.”

“He is always politicizing issues. I am also disappointed in NPP because when Muntaka alleged that the Supreme Court judges are corrupt, no one suggested that he should be dragged before the Privileges Committee. You all can go ahead to expel me from Parliament if you so wish. Do you think I rely on what I make as an MP? No one can silence me,” he added,

He also dared the CEO of the Multimedia Group, Kwasi Twum, to challenge the corruption allegations he has made against some staff members of the media organisation.

“I am surprised at how shameless Joy FM is. Before Joy FM will have the moral right to report me, it should first write an apology letter to the families that lost their relatives in the Ejura incident, as well as the individuals who sustained various degrees of injury.”

“I stand by my words, they are all corrupt. Kwasi Twum claims he did not tell me in my office that the staff of Joy FM is threatening to sabotage the government because we no longer take care of them. I dare Kwesi Twum to come again.”

He warned the media house not to push him to the wall, else he will release all the information he has gathered about them.

“If Joy FM pushes me to the wall, I will expose all the information I have gathered about them. I’m going all out. You cannot use the media and police to silence me. I will continue to speak the truth. How can a media house be this corrupt at the detriment of its responsibility to relay the truth? If there will be any disturbances in the country, it’ll arise from Joy FM” he said.

Meanwhile, the Speaker of Parliament, Alban Bagbin, has referred Kennedy Agyapong, who doubles as the Chairman of the Defence and Interior Committee of the house, to the Privileges Committee over the threats on the Luv FM journalist.

This was after Alhassan Suhuyini made the request on the floor of Parliament.

The Multimedia Group, whose subsidiary, Luv FM, is Mr. Asare Donkor’s employer, has already filed a formal complaint against the MP for threatening its journalist on his Net2 TV.

This is the second time, Kennedy Agyapong has been dragged before the committee.

Erastus Asare Donkor said he saw a total of seven military personnel who engaged in the shooting that left two protesters dead and four others injured in the Ejura disturbances.

He made this known when he appeared before the three-member ministerial committee investigating the issue.

Mr. Asare Donkor further added that the military initially started firing warning shots into the air, but later changed the direction and fired directly into the protesters.

When asked about how long the shooting lasted, Mr. Asare Donkor said it went on for about 20 to 30 minutes.

I'm Adwenpa-Hene |Blogger & Broadcaster Journalist. I am the CEO and manager of this noble website. I publish on Entertainment, Sports, Politics, Lifestyle, and Technology. You can also follow Us on : YouTube Channel - My Ghana Media TV, Facebook - MyghanaMedia TV , Twitter - @MyGhanamedia2 & Instagram - My Ghana Media TV. Email Address: [email protected] Contact Us: 0200818719
@@MyGhanamedia2
Previous Kotoko CEO Nana Yaw Amponsah – We Could Have Won The League With Ten Points If We Played At Baba Yara
Next Farmer Group Predicts Food Crisis By 2022 Over Fertilizer Shortage