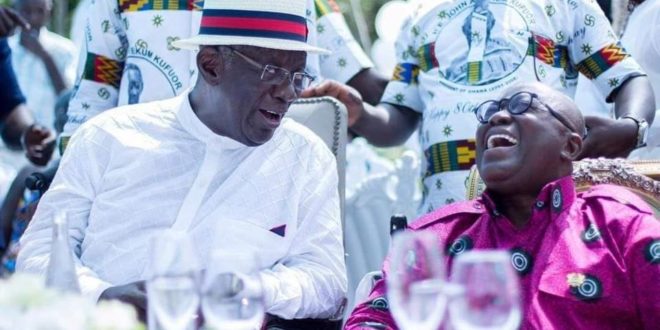 According to former President, Kufuor, the President should have the confidence to sack or move his appointees from their positions if it turns out they are no longer delivering on their mandates.

Mr. Kufuor who was responding to a question posed to him by celebrated journalist Kwaku Sakyi Addo when the former president hosted the Institute of Economic Affairs at his Peduase residence, said it is the President’s responsibility to ensure that when his appointees are no longer productive, he makes the difficult decision to replace them.

See also  Akufo-Addo: Those Who Do Not Share My Views On National Cathedral Are Like Sanballat And Tobias

Sharing a classic example of how he made some major reshuffles during his tenure, he explained that although there was an appointee who had been extremely supportive of his presidency when it mattered most, he moved her from a portfolio even though she wasn’t exactly pleased with it.

According to him, “I didn’t reshuffle just for the frequency of it; no. Like I mentioned Mrs. Asmah; I liked her so much, may her soul rest in peace, and she helped me so much when I was canvassing to become president… and the way she contributed towards establishing MASLOC. And so when we got into power, and I said Women’s and Children, she was trying to do it, but along the way, I saw that she wasn’t pulling the support that I expected from the women, especially the younger women”.

He continues that “So, we wanted the young people to be enthused about it so I saw that Alima would be able to bring on board the young people so I said Mrs. Asmah would be more effective going to the fisheries, to open the place up for us. So, that’s how I did the reshuffle and Alima came on board and I think Alima seemed to be making an impact with the young people… So, I didn’t just reshuffle for the sake”.

See also  Akufo-Addo: "Road Infrastructure By My Government Without Equal In The 4th Republic"

I'm Adwenpa-Hene |Blogger & Broadcaster Journalist. I am the CEO and manager of this noble website. I publish on Entertainment, Sports, Politics, Lifestyle, and Technology. You can also follow Us on : YouTube Channel - My Ghana Media TV, Facebook - MyghanaMedia TV , Twitter - @MyGhanamedia2 & Instagram - My Ghana Media TV. Email Address: [email protected] Contact Us: 0200818719
@@MyGhanamedia2
Previous Government Slashes Interest Payments For Domestic Bonds To 0% In 2023
Next Ghana To Send Nurses To UK – Health Minister Reveals