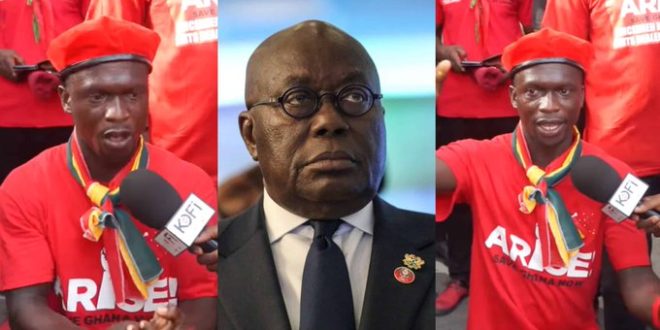 ‘My Greatest Sin Is Campaigning For Akufo-Addo Gov’t; Forgive Me’ – Yaw Berima To Ghanaians [Audio]

The Public Relations Officer of the True Drivers Union, Yaw Berima is asking for forgiveness from Ghanaians.

A staunch supporter of the New Patriotic Party (NPP), who was in the thick of things and encouraged Ghanaians to vote for President Akufo-Addo to power, has regretted his actions.

“ My Greatest sin is campaigning for president Akufo-Addo,   I beg God for forgiveness and  Ghanaians for misleading them to vote for Akufo-Addo. It’s so unfortunate that after all the support we gave the man [Akufo-Addo] he had let us down.”

According to him, he has regretted ever campaigning for President Akuffo Addo and the New Patriotic party to ascend the Presidential seat from 2016.

He was of the view that the New Patriotic party government does not have any respect for drivers and has reduced them to nothing.

He added that, the Chief Justice, Frema Opare has been lying to the driver unions that the government is working things in their favour during most of her meetings with them.

He mentioned that, President Akuffo Addo has been blaming Ghana’s economic issues on Covid19 pandemic and the Russia/Ukraine war which he deems very appalling.

He stressed that, drivers are loosing their jobs which is their means of livelihood due to the high spike in patrol prices and vehicle spare parts in the country.

He called on all drivers and Ghanaians in the country as a whole to decide well in the next coming elections so that the country can be back to being stable.

Yaw Barimah, PRO for True Drivers’ Union, says the union does not trust the government to provide affordable petroleum products as promised.

Listen to the interview below

The GPRTU announced the increase in fares earlier in the week. The move, according to the union has been necessitated by the continuous soaring of prices of petroleum products at the various fuel pumps.

Currently, diesel and petrol are selling for over GH¢18 and GH¢15 respectively at major fuel pumps.

Transport operators say the increase in fuel is eroding their profit.

Speaking on the state of the economy on Sunday October 30th 2021, President Akufo Addo revealed that the country’s era of abnormal increases in prices of petroleum products will soon be over.

He added that steps are being taken to “secure reliable and regular sources of affordable petroleum products”, to bring reprieve to consumers of the product.

“Government is working to secure reliable and regular sources of affordable petroleum products for the Ghanaian market. It is expected that this arrangement, when successful, coupled with a stable currency will halt the escalation of fuel prices and bring relief to us all”.

He added that the government’s promise to secure reliable and regular sources of affordable petroleum products for the Ghanaian market is not feasible.

“We do not believe in the promise to secure reliable and regular sources of affordable petroleum products for the Ghanaian market. I am saying this because of what he has told us in the past. We do not trust this promise either,” Yaw Barimah, PRO for True Drivers’ Union told host  Obuoba Ofori Amanfo.

I'm Adwenpa-Hene |Blogger & Broadcaster Journalist. I am the CEO and manager of this noble website. I publish on Entertainment, Sports, Politics, Lifestyle, and Technology. You can also follow Us on : YouTube Channel - My Ghana Media TV, Facebook - MyghanaMedia TV , Twitter - @MyGhanamedia2 & Instagram - My Ghana Media TV. Email Address: [email protected] Contact Us: 0200818719
@@MyGhanamedia2
Previous MMDCEs And Presidential Staffers Will Be Appointed From Constituency Executives – Peter Otokunor
Next Applicants Frustrated Over Delayed Issuance Of Passport Booklets