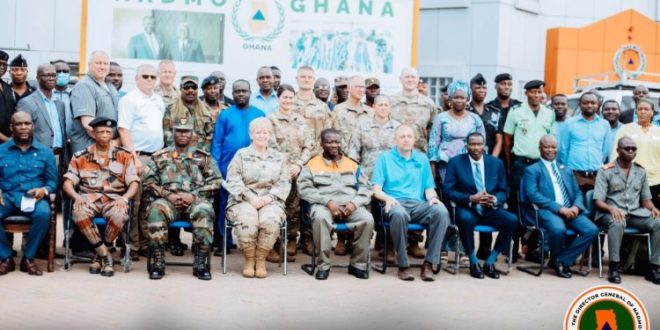 The Director-General of the National Disaster Management Organisation (NADMO), Eric Nana Agyemang-Prempeh, has bemoaned the lack of open spaces in Accra in event of an earthquake or other disasters.

According to him, open spaces provide a place for temporal tents and other structures as shelters to be erected in times of earthquakes and other emergencies.

However, most playgrounds in Accra, especially for public schools, have been converted to Astro turfs, and in some cases used for buildings.

At a media briefing ahead of a 3-day earthquake simulation exercise to be held between June 21 and 23 to test Ghana’s preparedness during an earthquake, Mr. Agyemang-Prempeh appealed to the Ministry of Education (MoE) to stem the practice that making open spaces inaccessible for public use, saying they serve as places where people could run to or converge in times of emergencies.

“I wish to also appeal to Metropolitan, Municipal, and District Assemblies to take a critical look at protecting the few open spaces left and try to create new ones not only in Accra but all over the country,” he said while urging the Land Use and Special Planning Authority (LUSPA) to support MMDAs in that effort.

The vulnerability of Accra, Tema, and adjoining districts to damaging earthquakes, he noted, could not be overemphasized and called on the two bodies to impress on traditional authorities to reserve spaces for the public good when demarcating land for human settlements.

See also  I Needed The Army To Protect My Staff At Yilo, Manya Krobo – ECG Boss

The simulation exercise, titled, ‘Lignite Coast Preparedness 2022, Exercise Shikpon Wosomo’, is being carried out in collaboration with Ghana’s security agencies and the North Dakota National Guard from the United States (US) with funding from the US government.

Major Jarrod Simek of the United States Embassy Office of Security Cooperation noted that current disasters around the world were a wake-up call for all nations and reiterated the need for all hands to be on deck to prepare effectively for any future emergencies.

The North Dakota Adjutant General and Director of Emergency Service, Major General Al Dohrmann, said all responsive agencies needed to be ready for all emergency cases.

The exercises will be conducted in Kpando in the Volta Region, the Tema Fishing Habour, and La Trade Fair Center, both in Accra.