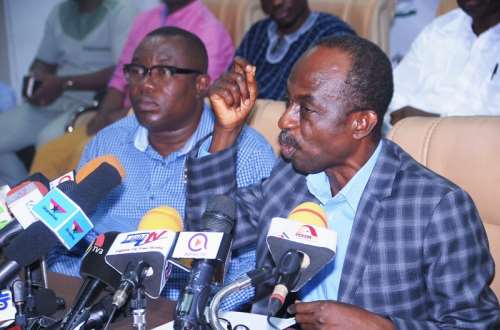 All is not well within the camp of the opposition National Democratic Congress (NDC) as the leadership of the party trades blows over cash, as the party decides to go digital in collecting membership dues.

According to DAILY GUIDE sources, the NDC is introducing a new app that would be used to collect dues from party members and donations from private individuals who want to support the party.

The app was introduced by the party’s General Secretary, Johnson Asiedu Nketia, and was piloted to the Functional Executive Committee (FEC) last week, with the launching fixed for this week.

However, the app has sparked internal controversy because some of the national executive officers who have been collecting donations privately in the name of the party and use it to their own benefits are not happy, seeing the new digital revolution as a blockade to their source of income.

During the launch of ‘Ahonto’ project by a presidential hopeful, Dr. Kwabena Dufuor at the NDC headquarters in Adabraka, Johnson Asiedu Nketia cautioned against the habit of private individuals who have been donating to individuals in the party instead of the party directly.

Asiedu Nketia said that any money that was not donated to the party account will not be recognised by the party, hinting that some of the donations had found their ways into individual pockets.

Earlier this year, the National Women’s Organiser, Hannah Louisa Bisiw, clashed with a Deputy General Secretary, Barbara Serwaa Asamoah, a close ally of Chairman Ofosu Ampofo at a Functional Executive Committee meeting. Hannah Bisiw was challenging Barbara to render account of all the money she collected prior to 2020 election.

Barbara was said to be in charge of money that was donated by private individuals to the campaign.

The perception within the party leadership is that Barbara allegedly made huge money from the donations.

See also  NDC’s Worst Defeat Is Not Yet Here, We Will Deliver That In 2024 Elections – John Boadu

As a result of this development, Johnson Asiedu Nketia says the party should go digital by introducing the app that will ensure that nobody can receive money privately on behalf of the party.

This decision by Asiedu Nketia has not gone down well with NDC National Chairman, Samuel Ofosu Ampofo and his ally Barbara Serwaa Asamoah.

Angered by this action of Asiedu Nketia to collect dues and donations for the party using the app, Ofosu Ampofo and Barbara boycotted a press conference addressed by the General Secretary to outdoor the party’s branch election time table and the introduction of the new app to the general public on Wednesday, June 13, 2022 even though it had been announced at the party’s FEC meeting last week.

Prior to this latest development, there are two main factions within NDC leadership.

I'm Adwenpa-Hene |Blogger & Broadcaster Journalist. I am the CEO and manager of this noble website. I publish on Entertainment, Sports, Politics, Lifestyle, and Technology. You can also follow Us on : YouTube Channel - My Ghana Media TV, Facebook - MyghanaMedia TV , Twitter - @MyGhanamedia2 & Instagram - My Ghana Media TV. Email Address: [email protected] Contact Us: 0200818719
@@MyGhanamedia2
Previous Ashgold SC Lose Match-Fixing Appeal
Next Minority Rejects Bawumia’s Claim The NDC Is To Blame For Ghana’s Return To The IMF