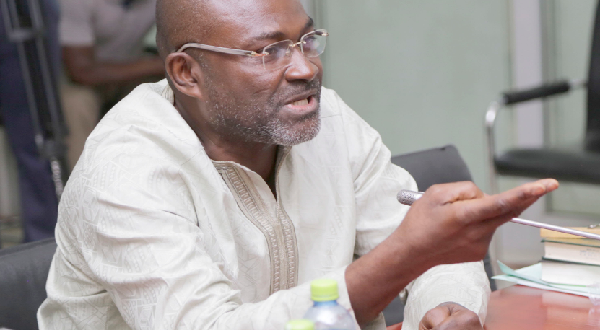 Ghanaian politician, Kennedy Agyapong has stated the two major political parties in Ghana are the reason the country has not been able to improve despite strides made by most sectors.

The MP for Assin Central who was addressing the youth at a conference held at the UPSA main auditorium stressed that it is because of the two dominating political parties that the country remains divided.

According to him, when in opposition, the politician throws dust into the eyes of the public to deny, convince them not to buy into the idea of the good works of the governing party because of their selfish nature.

He stressed that politicians must learn to criticize each other irrespective of party affiliation to develop the country.

“NDC, NPP and CPP, we’re all bogus, we are polarizing the country and it’s about time we speak and criticize ourselves and make sure we change the destiny of this country,” Kennedy Agyapong stated.

He added, “I live for you, so live for your brother too, that is the only way we can change the destiny of this country.”

He admitted that “There are good things being done in this country, you get to your opponent to turn it around to destroy the good intention of what you want to do, that must stop so we move this country.”

Kennedy Agyapong’s rage comes after some Cardiothoracic surgeons struggled to raise funds to travel and study the disease.

He said, “Doctors, they crack their brains, work, study and they don’t pay them well. They wanted just $11,000 to come and man this facility and they don’t have it. For one year, 7 doctors can’t afford $11,000 each. I gave them times seven of the money so they use the rest for other things.”

The businessman has cut the sword for the construction of an 80-bed Cardiothoracic Centre at the 37 Military Hospital for $4million.

I'm Adwenpa-Hene |Blogger & Broadcaster Journalist. I am the CEO and manager of this noble website. I publish on Entertainment, Sports, Politics, Lifestyle, and Technology. You can also follow Us on : YouTube Channel - My Ghana Media TV, Facebook - MyghanaMedia TV , Twitter - @MyGhanamedia2 & Instagram - My Ghana Media TV. Email Address: [email protected] Contact Us: 0200818719
@@MyGhanamedia2
Previous Video: Avoid Doggy If Your Manhood Is Small – Sex Coach To Men [18+ Only]
Next Gifty Twum Ampofo Apologizes To NDC MPs