Breaking News
Home / POLITICS / Ningo-Prampram MP : Eugene Arhin Would’ve Been Sacked If Akufo-Addo Was Up To His Game 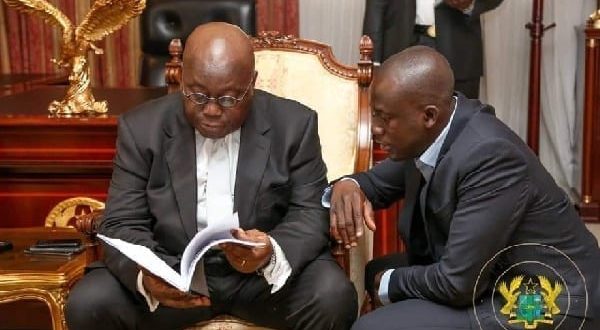 Ningo-Prampram MP : Eugene Arhin Would’ve Been Sacked If Akufo-Addo Was Up To His Game

National Democratic Congress (NDC) Member of Parliament for Ningo-Prampram Constituency Samuel Nartey George says the response by the Director of Communications at the Presidency to concerns raised by his colleague Samuel Okudzeto Ablakwa on President Nana Addo Dankwa Akufo-Addo’s travel expenses rather exposes the government.

The lawmaker says the “poor” response given by Eugene Arhin was from “an empty diaphragm”.

Speaking on TV3‘s New Day on Monday, June 27, the Ningo-Prampram MP said Mr Arhin would have been relieved of his post were he serving under a President who was up to his game.

“For someone like Eugene Arhin, who is our Presidential Spokesperson, that’s no mean position,” he said.

“His very long epistle that said so much but nothing. It was an empty diaphragm. I mean if the President was someone who was up to his game, he most likely would relieve Eugene Arhin of his job for a poor shabby response because the response actually exposes the fact that the government is hiding something.”

There has been back and forth between the North Tongu MP and Mr Arhin regarding the recent chartering of a flight by the President from Brussels to Rwanda’s capital Kigali for a Meeting of the Heads of State of the Commonwealth of Nations.

Mr Okudzeto Ablakwa had observed that the country had lost a total of €480,000.00, translating to GH¢4.1 million for the 21-hour movement of the ACJ319 D-Alex flight from Germany to Brussels, then to Kigali.

See also  National Cathedral: Retract Your False Claim Against Me Else I will sue – Attorney General Tells North Tongu MP

But the Presidency responded that President Akufo-Addo boarded a commercial flight to Paris, France from Ghana before joining a train to Brussels.

Akufo-Addo to travel to Portugal in presidential jet

It was from Brussels that the chartered flight picked up the President to Kigali, the Presidency stressed.

The response added that President Akufo-Addo joined his wife, Rebecca, on the Presidential Jet back to Accra.

But Sam George says Mr Arhin should have kept quiet over the matter and has worsened the case for the President by responding to the concerns raised by Mr Okudzeto Ablakwa.

“Eugene would have been of a better benefit to President Akufo-Addo’s lavish lifestyle by keeping quiet.

“He has done more damage to the President by speaking.”