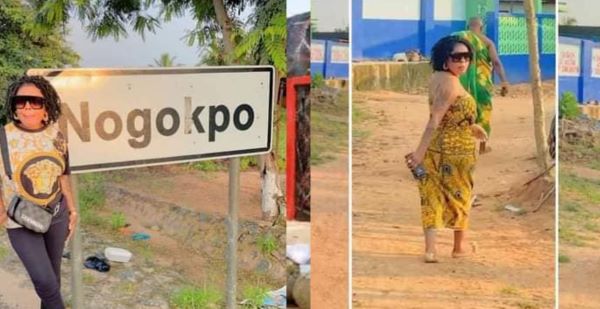 Authorities of Nogokpo Shrine in the Volta Region have registered their displeasure with showbiz personality, Afia Schwarzenegger for circulating images from the shrine.

She was there to allegedly further curse Chairman Wontumi and Lawyer Maurice Ampaw over her sex allegation case.

She decided to document her journey to the most powerful shrine, sharing images and videos on her social media creating a media frenzy about the whole situation.

But the shrine in a statement issued a stern warning to Afia Schwarzenegger to stop circulating photos of her visit to the shrine.

The shrine said it is not appreciative of things happening on social media as regards her case.

She should therefore be calm and allow the gods to judge the matter as she presented it to them.

The statement issued by Torgbui Amuzu Agbodzalu Williams and shared on the Nogokpo Shrines Facebook page said, “Nogokpo Shrine as popular and very serious Shrine is being visited by many people worldwide but as the customs demand, it is not allowed to circulate any pictures of your visitation on social media or in any public domain to create fear and panic before gods judge the matter brought.”

“I am thereby warning Afia Schwarzenegger to stop that practice immediately. She was allowed to communicate to gods alone and submit her matter to gods without anyone hearing the matter with her except the gods which she did as the first Initial stage.”

“I am therefore appealing to the general public especially the media to remain calm as Nogokpo Shrine is the very reliable place to determine the hidden truth so far as the African Traditional Religion is concerned,” it added.

Earlier reports alleged that Afia interestingly pulled down a particular video that documented her journey to the shrine after the warning.

I'm Adwenpa-Hene |Blogger & Broadcaster Journalist. I am the CEO and manager of this noble website. I publish on Entertainment, Sports, Politics, Lifestyle, and Technology. You can also follow Us on : YouTube Channel - My Ghana Media TV, Facebook - MyghanaMedia TV , Twitter - @MyGhanamedia2 & Instagram - My Ghana Media TV. Email Address: [email protected] Contact Us: 0200818719
@@MyGhanamedia2
Previous President Akufo Addo Commissions The Second Phase Of UGMC
Next NPP’s Borrowing Is Better Than When NDC Was In Power – Majority Leader