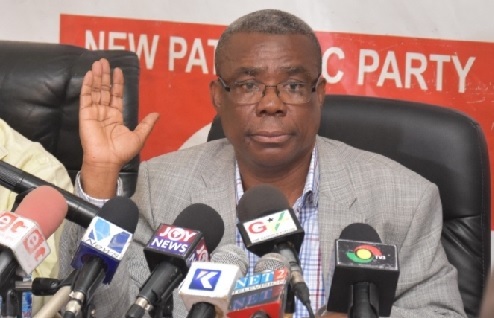 The New Patriotic Party (NPP) appears to be contacting successful aspirants who went through the party’s vetting process.

The vetting report was supposed to have been released to the public today but party sources said the aspirants have to be informed before making it public.

One of the successful aspirants who is gunning for the General Secretary position of the ruling Party, Iddrisu Musah commonly called Musah Superior announced that he has successfully passed the vetting conducted by the Mac Manu Committee of the party.

According to him, he has been informed about his clearance to contest the forthcoming election as a national officer of the party.

The former Mayor of Tamale posted on his Facebook wall that “I have been formally informed that I have successfully passed the vetting. Glory be to Allah.”

Musah Supeior is putting himself up for election as General Secretary of NPP, challenging the incumbent, John Boadu.

The former campaign aide to then flagbearer of the party, Nana Addo Dankwa Akufo-Addo is leaving nothing to chance in his resolve to become the chief scribe of the elephant family.

See also  Let’s Focus On Taking Down NDC Instead Of Each Other – Dr. Bawumia

He is feverishly lacing his boots for the position as he picked form and filed his nomination and gone to the vetting on Monday for new executive position.

Iddirsu Musah Superior who played a vital role in the campaign of suspended former General Secretary of the party, Kwabena Agyei Agyapong later fell out with him over his style of administration and certain decisions he was reported to have taken.

Superior is currently deputy Chief Executive of the Forestry Commission.

Meanwhile, the incumbent General Secretary of the NPP, John Boadu is contesting again to retain in the coming congress to be held at the Accra Sports Stadium.

I'm Adwenpa-Hene |Blogger & Broadcaster Journalist. I am the CEO and manager of this noble website. I publish on Entertainment, Sports, Politics, Lifestyle, and Technology. You can also follow Us on : YouTube Channel - My Ghana Media TV, Facebook - MyghanaMedia TV , Twitter - @MyGhanamedia2 & Instagram - My Ghana Media TV. Email Address: [email protected] Contact Us: 0200818719
@@MyGhanamedia2
Previous GHS Worried Over Rise In COVID-19 Infection Among Children In Accra
Next Alan Kyerematen Lacked Courage To Resign From A Gov’t Saddled With Corruption – NPP Founding Member