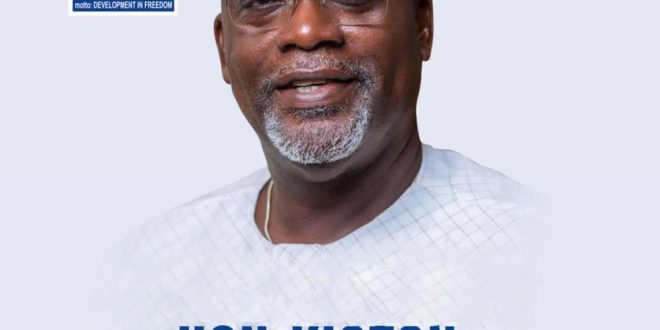 The National First Vice Chairman hopeful of the ruling New Patriotic Party (NPP), Mr Kiston Akomeng Kussi has officially presented his nomination forms to the national election Committee of the NPP in its headquarters of in Accra, giving him the legal backing to contest the position of the National First Vice Chairman of the party in the up-coming national executives election in Accra.

Mr Kiston Akomeng Kissi born July 4, 1957 is a Ghanaian politician and a member of the Third Parliament of the Fourth Republic representing the Akwatia Constituency in the Eastern Region.

Addressing journalists in Accra after he filed his nomination forms, Mr Kissi stated that when given the nod he will ensure the members and supporters of the party have opportunities in the NPP.

Additionally, he said that he would set up a database system that would ensure a fair distribution of opportunities for party members and businessmen who invest in the party when given the nod.

He stated that his truck records as the former Eastern Regional Chairman of the NPP attested to the fact when given the nod he would bring that experiences on the board in the national level to structure the foundation of that part to win both presidential and parliamentary elections in the 2024.

He pointed out he would work hard to help the NPP to improve its structures aiming at ‘breaking the eight jinx.

He further assured to improve communication system in the party to educate the grassroots to understand what is really happening within the party.
He was also the Dean of all the 16 Regional Chairman and also a two terms constituency treasure of Akim Oda in the Eastern Region