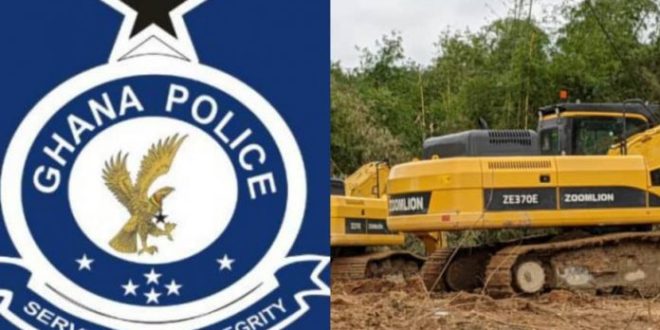 His interdiction came Monday, September 5, 2022, following the missing excavators brouhaha between his outfit and the District Chief Executive of Ellembelle, Kwasi Bonzo.

Some two excavators were seized on Tuesday August 30, 2022 by a combined team of members of the Ellembelle District Mining Committee and District Security Council metres away from the Nkroful Agriculture Senior High School for engaging in illegal mining.

The two machines however went missing two days after the DCE said he left them in the care of the Ellembelle Police Command.

Accusing fingers were raised between the police and DCE.

Meanwhile, the DCE has been arrested Wednesday morning after he spotted one of the missing excavators and tried stopping those who were transporting it.

I'm Adwenpa-Hene |Blogger & Broadcaster Journalist. I am the CEO and manager of this noble website. I publish on Entertainment, Sports, Politics, Lifestyle, and Technology. You can also follow Us on : YouTube Channel - My Ghana Media TV, Facebook - MyghanaMedia TV , Twitter - @MyGhanamedia2 & Instagram - My Ghana Media TV. Email Address: [email protected] Contact Us: 0200818719
@@MyGhanamedia2
Previous Ellembelle DCE Arrested Over Missing Excavators
Next Mahama To IMF Boss: ‘It Is A Relief To Support The People Of Ghana In These Perilous Times’