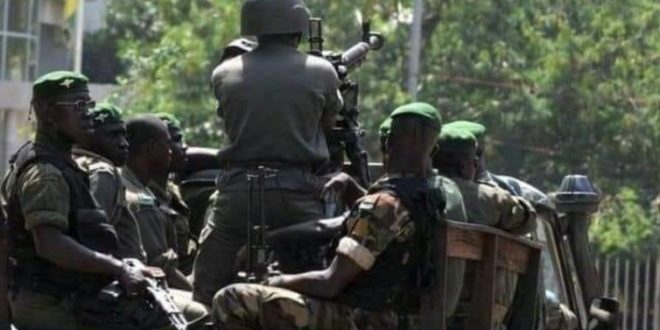 Video: Couple Of Coups May Happen In West Africa Between Now And June 2023 – Prof. Aning

The Director of the Faculty of Academic Affairs and Research at the Kofi Annan International Peacekeeping Training Centre (KAIPTC), Prof. Kwesi Aning, is predicting a couple of coup d’etats in the West African Region.

He said if the regional bloc, ECOWAS and the African Union (AU) does not urgently resolve the insecurity threats in the region.

This, he said, is a result of the trajectory of extreme violence and the toxicity in politics such as excessive corruption, unemployment, poor educational system and other underlying factors of political instability present in most West African countries.

Speaking to host Samson Lardy Anyenini on the Burkina Faso crisis on Newsfile, Saturday, Prof. Aning said the region is likely to experience two more of such political instability between now and June 2023.

“This would not be the end of it. Between now and June 2023, we would see similar things happen. Probably two more. If we don’t stem the tides between now and 2023 then we get two more, the pack of cards will begin to fall,” he said.

According to him, West African leaders must engage in quality intelligence and risk assessment analysis to inform preventive actions against coup occurrence in the region.

Prof Kwesi Aning said the region is experiencing coups not because of the military thirst for power but how democracy is implemented in the sub-region.

Prof. Aning added that for West African countries to pull the brakes on the instability experienced, unconstitutional acts such as changing the constitutional processes must be avoided.

“What is failing West Africa and the Sahel is not the military penchant for power; unfortunately, it is democracy and how we run it and implement it that is failing us…Pulling back from that brake, unconstitutionality is when the military takes power and when people play games with the constitutional process… So we need to expand that physiology and to ensure we do things differently,” he stated.

The West African region has experienced three different coups within a year. The most recent is the Burkina Faso coup, where military leader Lieutenant Colonel Paul-Henri Damiba, together with some mutinies, deposed President Roch Kabore.

The coup was due to deepening anger about Kabore’s response to violence by armed groups.

The ECOWAS has already condemned the coup and is hoping to restore order in Burkina Faso.

I'm Adwenpa-Hene |Blogger & Broadcaster Journalist. I am the CEO and manager of this noble website. I publish on Entertainment, Sports, Politics, Lifestyle, and Technology. You can also follow Us on : YouTube Channel - My Ghana Media TV, Facebook - MyghanaMedia TV , Twitter - @MyGhanamedia2 & Instagram - My Ghana Media TV. Email Address: [email protected] Contact Us: 0200818719
@@MyGhanamedia2
Previous John Kumah: Our Research Shows About 24% Drop In Mobile Money Transactions After E-Levy Introduction
Next 2021 AFCON: Sports Minister Reveals How Much Was Spent On Black Stars