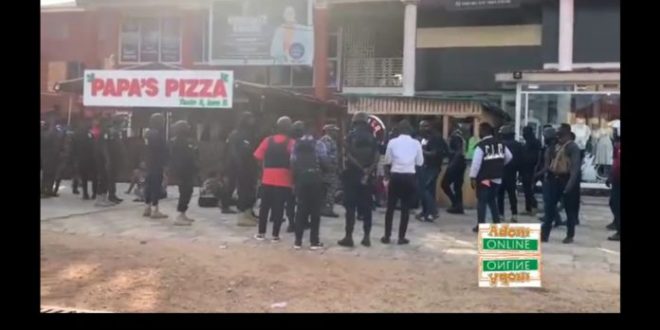 Video: One Shot Dead As Irate Youth Clash With Police At Kotobabi

One person has reportedly been shot dead with another in critical condition after a group of irate youth clashed with the police at the Kotobabi market near Spintex.

The incident occurred on Wednesday after the security personnel stormed the area to enforce a reclamation exercise by the Tema West Municipal Assembly.

However, squatters in the area resisted, creating a chaotic scene.

See also  Akyem-Oda Methodist Bishop To NPP: You Can't Break The 8, If You Want Power To Amass Wealth

A reinforcement team is said to have been called in to augment the efforts of the police as tempers were still high.

Meanwhile, some persons suspected to have been part of the attack have been arrested pending further action.

This comes on the back of a similar exercise in November.

The slum, which is some 30 metres from the Ecobank Junction, had for years been seen as a hub of the operations of alleged drug peddlers and syndicates of prostitution gangs and armed robbery.

The exercise followed what the assembly said were the health hazards the squatters and residents of the area were exposed to during a recent fire outbreak in the slum, which destroyed some of the makeshift homes.