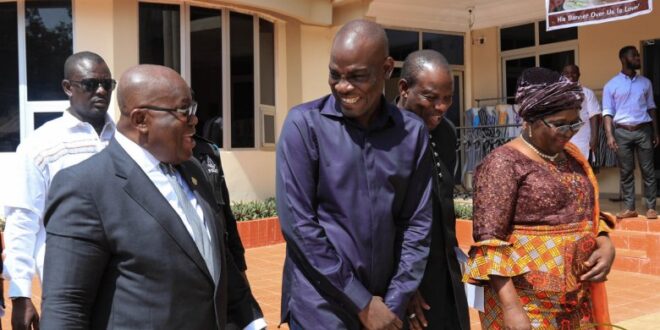 Wagner Comment: If You Can’t Provide Us Food, Don’t Let Them Bring Guns On Us – Minority Leader To President Akufo-Addo

Minority Leader Haruna Iddrisu has chastised President Akufo-Addo over his comments on the Russian mercenary group Wagner in Washington.

According to him, President Akufo-Addo did not exercise good judgment in his comments.

Mr Iddrisu said the President who had previously served as a Foreign Affairs and Attorney General ought not to be making such “irresponsible and unprofessional” comments.

The Tamale South lawmaker said the comments could have dire repercussions on the country should Russia decide to take an action against it.

Speaking at the NDC Congress on Saturday, Mr Iddrisu disclosed that the Minority will demand a detailed briefing on his comments.

“As we address this Congress, President Akufo-Addo has not only failed by creating an economic mess, he has also gone ahead to create what you call a foreign policy crisis.

“For those who listened to him, a former Foreign Affairs Minister, former Attorney General he simply failed to momentarily have impulse control and to ensure a balance between foreign policy and security the security of our state as he openly condemned Burkina Faso and mentioned the Wagner group of Russia.

“I have information that our Ranking Member of the Foreign Affairs Committee and members will ask for a detailed briefing to Parliament on this reckless, irresponsible and unprofessional statement by the President of our Republic, he cannot provide us with food, he should not let them bring guns on us as a country,” he chastised.

The President speaking to reporters alongside U.S. Secretary of State Antony Blinken on Wednesday, December 14, alleged that Burkina Faso had hired the mercenaries.

“Today, Russian mercenaries are on our northern border. Burkina Faso has now entered into an arrangement to go along with Mali in employing the Wagner forces there,” Akufo-Addo said, adding that it was a distressing development for Ghana.

Mr Akufo-Addo also alleged that Burkina Faso had offered Wagner a mine as payment.

After the comments, Burkina Faso summoned the Ghanaian ambassador on Friday morning for “explanations.”

In a statement issued after the meeting with the ambassador, Burkina Faso’s foreign ministry said it had “expressed disapproval” about the statements made by the Ghanaian president.

“Ghana could have undertaken exchanges with the Burkinabe authorities on the security issue in order to have the right information,” it said.

I'm Adwenpa-Hene |Blogger & Broadcaster Journalist. I am the CEO and manager of this noble website. I publish on Entertainment, Sports, Politics, Lifestyle, and Technology. You can also follow Us on : YouTube Channel - My Ghana Media TV, Facebook - MyghanaMedia TV , Twitter - @MyGhanamedia2 & Instagram - My Ghana Media TV. Email Address: [email protected] Contact Us: 0200818719
@@MyGhanamedia2
Previous May The Lord Touch Your Heart To Forgive Me If I Have Offended You – Asiedu Nketiah Says As He Bows Out
Next 2024 Elections: “We Need A Healthy NDC, We Don’t Want To Defeat A Limping Horse” – NPP