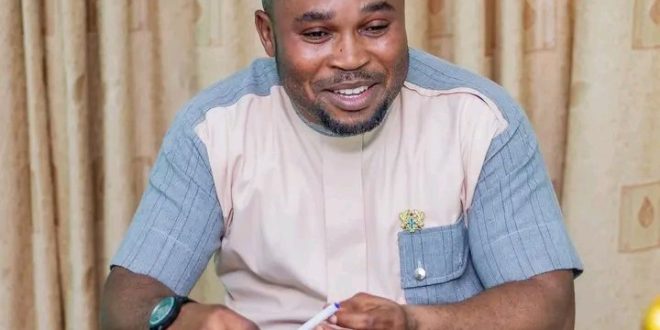 On Tuesday,  4th January, 2023,   Hon. John Kwame Duodu, the youth advocator and the benevolent man who is affectionately known as Sir John, who doubles as the Atwima Nwabiagya South Constituency First Vice Chairman of the New Patriotic Party (NPP), in an exclusive interview with My Ghana Media editor-in-chief disclosed and outlined vehemently some reasons why Ghanaians have to retain the ruling New Patriotic Party in government.

He also mounted a spirited defense for the Akufo-Addo-led NPP government amidst the increasing lamentations on the hardship across the country.

Sir John also indicated that his party has proven it deserves another term in office, considering its performance over the past six years.

Hon. John Kwame Duodu, (the peoples Sir John), stressed that regardless of the economic hardship experienced across the globe due to global health crisis which has led to the recession in world economic growth and the war between Russia and Ukraine, the Akufo-Addo-led government has continued to deliver exceedingly on its mandate.
He reiterated that the NPP has justified its call to “break the eight” owing from the delivery it has made towards attaining development and economic growth.

According to Sir John, in spite of the crisis, the NPP government led by President Akufo-Addo and his Vice President, Dr. Bawumia, have made great strides and will continue to make progress as a country.

“Contrary to what the opposition and critics would want us to believe, Ghana has moved on a great deal,” he added.

He said that the government continues to pay salaries of public sector workers, teacher and nursing trainee allowances, sustain the Free SHS, provide educational infrastructure, and complete abandoned projects which the National Democratic Congress left before leaving office. He further listed the revival of the National Health Insurance Scheme, the posting of nurses and teachers, and expansion of housing, roads, and railway sectors which forms part of the major historic achievements of the Akufo-Addo-led government.

He said the government has delivered all these and sustained its policies, programs, and social interventions without an International Monetary Fund (IMF) bailout.

“This is the economy some propagandists want us to believe is in shambles.It’s key to note that all these things were chalked without any intervention or support from the International Monetary Fund (IMF). “Government is on top of governance,” he quizzed.

According to the stalwart NPP First Vice Chairman of the good people of Atwima Nwabiagya south constituency popularly called Sir John, “it will be a huge political suicidal if Ghanaians decide to replace the incumbent New Patriotic Party (NPP) with the opposition National Democratic Congress (NDC) or any other political party in the upcoming 2024 general elections.”

He noted that the economy was in disarray under the erstwhile president, John Dramani Mahama, and his NDC party.

“If Ghanaians see the NDC as an alternative, so be it. But I can confidently tell you at all times, looking at the NDC today, they cannot manage their own household than to mange the country. And bear in mind that the Bible even says he who cannot manage his own household is not a true believer and this is not about propaganda “he said.

The member of National Association of TESCON Patrons of Ghana added that Ghanaians shouldn’t be oblivious to give the NDC any chance to return to power, either than that they will cancel all the social intervention programs, including the Free SHS policy established by the NPP government.

In the history of the 4th republic, the Ghanaian economy has seen or experienced great economic growth. Casting back to President Kuffour’s administration, many highways in Ghana were completed, also social interventions were introduced including; payment of monthly allowance for Nursing and Teacher Trainees and many other intervention. But we saw how the NDC administration cancelled all these social interventions, claiming the nation doesn’t have money. But they were able to use over 260 million Ghanaian Cedis to complete Circle Interchange, but Nana Addo under the NPP government used less than 260million Ghanaian Cedis in constructing and completed 4 mega interchanges, including; Pokuase, Tamale, Obetsebi Lamptey and Takoradi Interchange.

A government that is accountable, care about the people in the nation, is about what Ghana needs and the NPP government has proven it.

NPP is a centre right political party, meaning it has the welfare of the people at heart, so most of their policies are social interventions, for instance; H.E Kuffour implemented free Basic School, Free healthcare for Pregnant women, many others, which we saw in his administration.

It’s the party that has brought a lot of developmental initiatives, Fmr. Prez Kuffour’s initiative to enhance and promote agric produce, also initiatives Nana Addo has implemented like 1D1F, agenda 111(which is ongoing) and many others

Npp government under the Nana Addo administration, inflation is underway to be tackled and if the inflation is well tackled the Cedi will be stable.

See also  There’s Frustration In The System; Opposition Will Have A Windfall If ............ – Deputy Majority Leader

A lot done, a lot more needs to be done to recover from the Inflation and Cedi situation and I am confident in the capacity of the Government to get us out of this situation.

This surely is as a result of our own domestic doings but largely as a result of the unprecedented Global Economic meltdown currently not sparing any nation.

Just as all nations are working to recover and overcome this challenge, so are we as a nation and we must be hopeful to come out of this together. We have done this Before .

Thankfully unlike in other nations, our country is being protected from energy crisis, shortage of food, removal of social protection from the poor and vulnerable etc.

Finally, though we are in tough times, but we have a leadership that’s resilient enough to sail us through, that’s not in doubt.