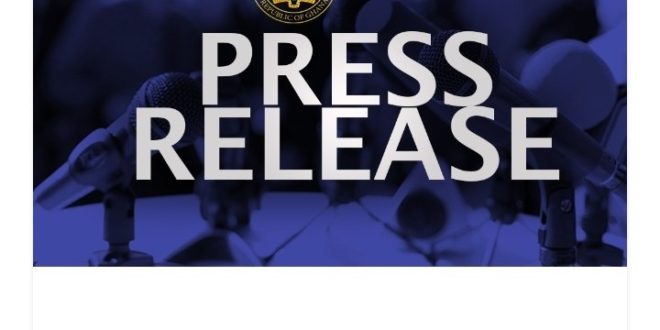 A statement signed by the Minister for Interior, Ambrose Dery, said the day “has been declared a Public Holiday to mark “Constitution Day.”

The statement called on Ghanaians to observe the day as a statutory public holiday throughout the country.

“The general public is hereby notified that Saturday, 7 January 2023 marks Constitution Day which is a Statutory Public Holiday.”

“However, in view of the fact that 7th January 2023 falls on a Saturday, His Excellency, the President of the Republic of Ghana, has by Executive Instrument (E.I), in accordance with Section 2 of the Public Holidays and Commemorative Days Act, (Act 601) declared Monday, 9th January 2023 as an additional Public Holiday and should be observed as such throughout the country.”

In December 2018 a bill was laid before Parliament to amend the Public Holiday Act 2001 to provide for three different holidays.

These new holidays were the 7th of January which was observed as Constitution Day earlier in 2019, the 4th of August which was described as Founders’ Day, and the 21st of September was marked as Kwame Nkrumah Memorial Day.

In 2017, President, Nana Addo Dankwa Akufo-Addo, proposed that August 4 should be observed as Founders’ Day in memory of the successive generations of Ghanaians who contributed to the liberation of the country from colonial rule and September 21 set aside as a Memorial Day for Dr. Kwame Nkrumah, Ghana’s first President who was instrumental in the fight for the 6th March independence.

This bill was subsequently passed by Parliament and assented to by the President.

I'm Adwenpa-Hene |Blogger & Broadcaster Journalist. I am the CEO and manager of this noble website. I publish on Entertainment, Sports, Politics, Lifestyle, and Technology. You can also follow Us on : YouTube Channel - My Ghana Media TV, Facebook - MyghanaMedia TV , Twitter - @MyGhanamedia2 & Instagram - My Ghana Media TV. Email Address: [email protected] Contact Us: 0200818719
@@MyGhanamedia2
Previous UG Management On Fee Increment: If You Feel There Is An Illegality, The Court Is There
Next Why NPP Remains The Best Option For Ghana — Sir John Laments