Breaking News
Home / GENERAL NEWS / #WorldPressFreedomDay: ‘Without Freedom Of The Press, There Are No Real Democratic Societies’ – UN Secretary-General 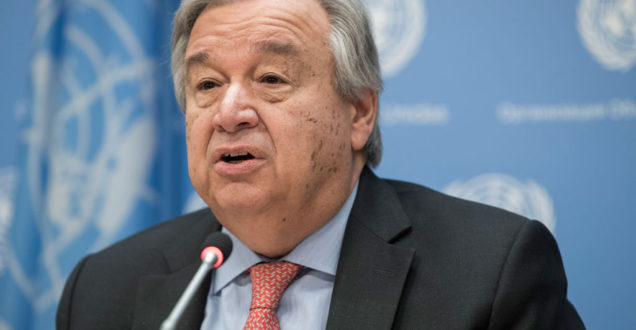 #WorldPressFreedomDay: ‘Without Freedom Of The Press, There Are No Real Democratic Societies’ – UN Secretary-General

The Secretary-General of the United Nations (UN), António Guterres has reiterated the importance of press freedom in various countries.

Without freedom of the press, there are no real democratic societies.

Without freedom of the press, there is no freedom.#WorldPressFreedomDay

Mr Guterres who joined the world to celebrate #WorldPressFreedomDay took to his Twitter on Tuesday to celebrate the bravery of media practitioners.

He noted that despite the numerous dangers faced by journalists, they work earnestly to ensure that political leaders remain accountable to their people.

Journalists & media workers are facing increased politicization of their work & attempts to silence them from many sides.

On #WorldPressFreedomDay, we honour their essential work in speaking truth to power, exposing lies, and building strong, resilient institutions & societies.

Meanwhile, Ghana has dropped 30 places in the latest press freedom index put together by Reporters Without Borders.

This ranking is the lowest the country has ever seen in the past 17 years since it placed 66th in 2005.

On the African continent, the country was ranked 10th behind a number of African countries, including Burkina-Faso which ranked 6th on the continent.

The report says “government has shown itself intolerant of criticism. In addition, one-third of media outlets are owned by politicians or by people tied to the top political parties. The content they produce is largely partisan.”

It continued that “press freedom is guaranteed by the Constitution of 1992. Media are free to operate as they like, in accordance with the regulations of the National Media Commission. The 2019 information access law authorises journalists to demand information of national interest.”

The report comes on the back of recent reports that the Ghanaian government has been clamping down on dissent and claims of a surge in press freedom violations.

On February 10, 2022, an Accra FM presenter, Kwabena Bobbie Ansahm was arrested on a charge of “publication of false news and offensive conduct” for posting a video on social media, claiming the First Lady, Rebecca Akufo-Addo, had allegedly obtained state land in order to build the headquarters for a foundation.

This claim was false, the Police investigation said.

Godsbrain Smart of Onua TV was also arrested for an alleged case of extortion, although some have claimed it has to do with his fierce criticisms of government.

I'm Adwenpa-Hene |Blogger & Broadcaster Journalist. I am the CEO and manager of this noble website. I publish on Entertainment, Sports, Politics, Lifestyle, and Technology. You can also follow Us on : YouTube Channel - My Ghana Media TV, Facebook - MyghanaMedia TV , Twitter - @MyGhanamedia2 & Instagram - My Ghana Media TV. Email Address: [email protected] Contact Us: 0200818719
@@MyGhanamedia2
Previous NDC Is Dormant Party, Not Ready For Power – Director of Political Affairs At Presidency
Next CHRAJ Ready To Probe Serwaa Broni’s Allegations Against President Akufo-Addo