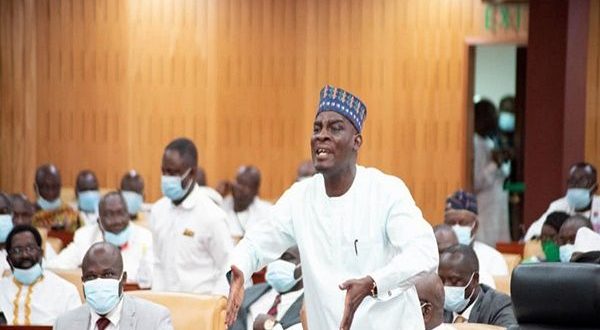 Minority Leader, Haruna Iddrisu, has taunted the Minister for Finance, Ken Ofori-Atta over his presentation of the 2022 Budget Statement and Economic Policy dubbed the ‘AGYENKWA Budget’ which is aimed to provide relief to Ghanaians.

According to the Finance Minister, the government will be introducing further taxes to expand the tax net.

“After considerable deliberations, Government has decided to place a levy on all electronic transactions to widen the tax net and rope in the informal sector. This shall be known as the “Electronic Transaction Levy or E-Levy”

“Electronic transactions covering mobile money payments, bank transfers, merchant payments and inward remittances will be charged at an applicable rate of 1.75%, which shall be borne by the sender except inward remittances, which will be borne by the recipient. Mr. Speaker, to safeguard efforts being made to enhance financial inclusion and protect the vulnerable, all transactions that add up to GH¢100 or less per day (which is approximately GH¢3000 per month) will be exempt from this levy”, Hon. Ofori-Atta read while also touching on other sectors of the economy.

But, to the Miniority in Parliament, the budget has already failed to live its purpose.

Speaking to move the motion after the Finance Minister’s presentation of the budget in Parliament on Wednesday, November 17, 2021, the Minority Leader, Haruna Iddrisu sarcastically praised him for compounding the burdens of Ghanaians.

In his address to the House, he said; ”Mr. Speaker, ‘Kro no ayɛ shi’. The system is hot; to wit the system may not be able to bear the hardship. Literally, the system is hot, Mr. Speaker. And Mr. Speaker, it’s only the Hon. Ken Ofori-Atta who ironically eases burdens to quote his words that there is no emotion about the suffering of Ghanaians, yet he is imposing further suffering, imposing a 1.75 MOMO electronic banking tax. So, it’s only Ken Ofori-Atta who eases suffering with the imposition of new taxes targeted at GHC 15 billion within this period.”