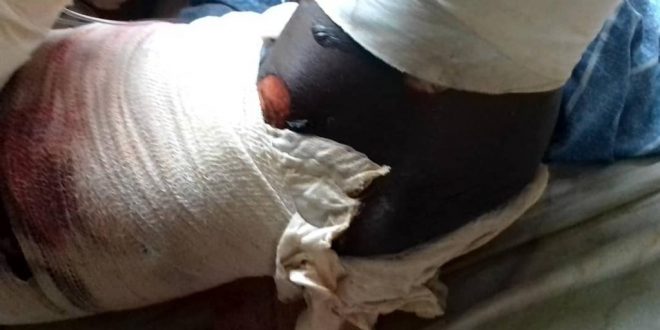 Two youth groups in the Ellembele District of the Western Region, SHAIP Africa and the National Alliance for Nzema Development, have condemned the alleged burning of a suspected illegal miner by security officers protecting a mining concession site belonging to Adamus Resources Limited at Nkroful.

The victim, Michael Budo, a physically-challenged person, on Thursday sustained life-threatening burns all over his body after the security personnel allegedly poured petrol on him and set him ablaze.

The incident is said to have occurred as the security officers accused him of trespassing as an illegal miner.

The General Secretary for the National Alliance for Nzema Development, Clement Blay, told Citi News that while they do not condone illegal mining, it is unacceptable for instant justice to be metted out to suspected illegal miners.

He said the youth groups were disappointed in Adamus Resources Limited and its security officers for perpetrating such a heinous crime against Mr. Budo.

“We gather that the youth were there for illegal mining. We cannot ascertain if they had the requisite permit. We all support the fact that illegal mining should not be encouraged, because it is leading to the destruction of our water bodies and other vital resources that will endanger our very survival as individuals, but we are also not oblivious of the fact that instant justice is something that this country abhors and so we shouldn’t encourage it in any way, and so we expect Adamus Resources which participated in this brutality to have known better as a corporate organization to ensure that we work within the laws of Ghana,” he said.

The victim, in an earlier interview with 3News narrated his ordeal, explaining that, “in the morning at about 7:30 to 8:00, I was at the site and went to fetch water. While doing that, I was arrested by land guards, handcuffed and taken back to where the Changfan is. When we got there, they started beating me with cutlass and fan belt”. 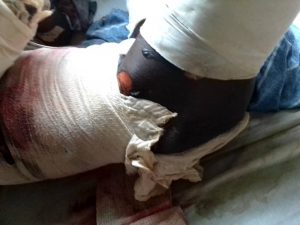 “After that, they left a pumping machine and diesel on my back and warned me not to let it fall. But the items fell and they started to beat me again. There was this one amongst them who threatened that I will be burnt together with the machine.”

“Then that one who has been threatening me, lifted the diesel and poured it on me. But one of them collected it from him. There was this fire close by where they had dumped all our belongings. I was asked to get close to the fire. Then that same guy went for the diesel again and poured it into the fire. Because they had pushed me close to the fire some of the flames touched my diesel drenched body and sparked fire. 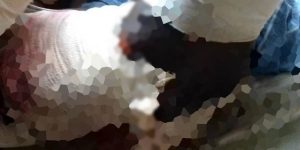 “I started screaming and rolling on the floor in an attempt to quench the fire. After, then he came to drag me to a nearby pit and opened the handcuffs”.

When Citi News contacted, the Social Responsibility Manager of Adamus Resources, Francis Baah, confirmed the incident happened on their concession, but said it was not intentional.

He said the Esiama  Police have commenced investigations into it.

“Yes, there was an accident. Our security patrol team on their usual patrols went to one of the pits and encountered these illegal people. One guy was arrested and made to carry a Chafang machine that contains fuel. The fuel got into contact with fire. The issue is currently under investigation,” he said.

I'm Adwenpa-Hene |Blogger & Broadcaster Journalist. I am the CEO and manager of this noble website. I publish on Entertainment, Sports, Politics, Lifestyle, and Technology. You can also follow Us on : YouTube Channel - My Ghana Media TV, Facebook - MyghanaMedia TV , Twitter - @MyGhanamedia2 & Instagram - My Ghana Media TV. Email Address: [email protected] Contact Us: 0200818719
@@MyGhanamedia2
Previous MTN To Shut Service Centres From Dec. 29 To Jan. 3 Over Omicron Spread
Next Archbishop Desmond Tutu Was A Redoubtable Priest -Akufo-Addo